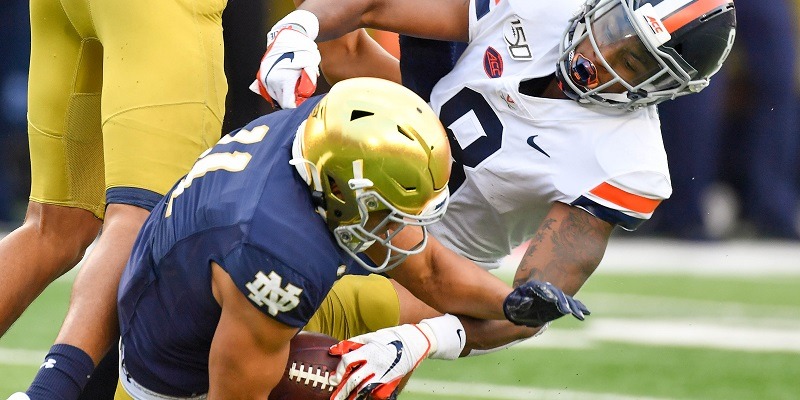 Gilman began his career at Navy and finished second on the team with 76 tackles as a true freshman. He sat out in 2017 as a transfer, then recorded 95 tackles as a 13-game starter for the Fighting Irish in 2018, including a school-record 19-tackle effort against Clemson. He had 76 tackles and three forced fumbles as a redshirt junior in 2019.

Gilman struggled at the NFL Scouting Combine, posting a slightly below-average 40-yard dash (4.60 seconds) before finishing last in the vertical (32 inches) and fourth-to-last in the broad jump (119 inches) among safeties.

A well-versed safety, Gilman played a variety of roles for the Irish. Capable of locking up tight ends when he can take them off the line of scrimmage. Fast enough to close on the ball in the run game and underneath passes. Reliable tackler who gets the job done even when not in ideal position. Rarely outright misses his target. Processing speed is particularly impressive when working against the run. Strong enough to disrupt route timing and wreak havoc with his hands. Finds the ball in a crowd and hunts it down through chaos. Angles to the ball are pristine and keep him in the action.

Gilman is not the greatest straight-line mover and will need to make up for his athletic limits by being smart with positioning. Technique as a tackler needs some work, as he tries to latch on with his hands before delivering his weight into the target. Rarely gets chances to play the ball in the air unless he’s working against tight ends. Plays the man instead of the ball. Lack of agility can make matching shifty runner in coverage a near impossible task.

Shawn Williams, Cincinnati Bengals — Williams was a late bloomer but blossomed into a starting safety over the past several seasons. Gilman’s ceiling is similar as a reliable starter.