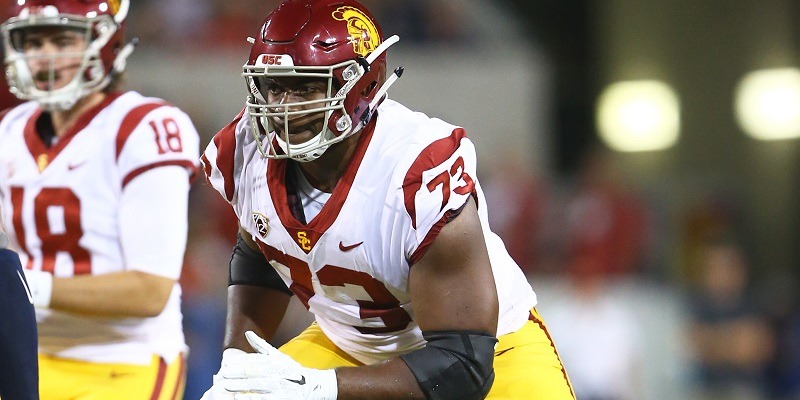 Jackson was a legacy recruit at Southern California, where his grandfather, Melvin, played. Jackson emerged as the starting left tackle as a sophomore, capping his career with first-team All-Pac-12 accolades as a junior in 2019, despite starting the season slowly after donating bone marrow to his sister in July. He declared early for the draft after making 25 career starts.

Jackson had a solid all-around workout at the NFL Scouting Combine, finishing in the top 10 among offensive linemen in most categories.

Jackson fires off the snap out of his two-point stance, coordinating his upper and lower halves like an Olympic ice skater, easily cutting off the edge to frustrate speed rushers and skipping back inside to defeat counters inside. Corrals defenders with his hands, alternately rabbit-punching to keep them off balance in pass protection or latching on and walling off in the running game. Shows terrific agility in the second level, re-directing to stalk and eliminate linebackers, even spinning off opponents and “getting skinny” like a penetrating defender to effectively block downfield. Showed up bigger at the combine than expected but still looked athletic.

Jackson has a somewhat unusual frame for an offensive tackle, with fairly narrow shoulders and hips that might keep him from adding much more weight. He typically lined up in the two-point stance in 2019 and didn’t have to hold his blocks for long in the up-tempo, quick passing attack USC utilized. A bit reliant on his rapid-fire jabs, as his punches lack knockdown power; stronger, experienced defenders were able to swat them away or snap his wrists effectively.

Terron Armstead, New Orleans Saints — It isn’t difficult to imagine Jackson hearing his name called among the top-20 picks and ultimately completing for Pro Bowl honors, just as Armstead (6-5, 304) has earned the past two years after playing his college ball at relatively tiny Arkansas-Pine Bluff.