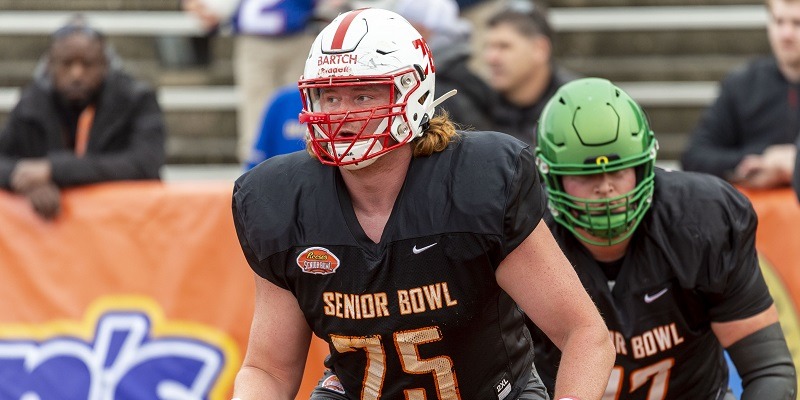 A big fish in a small pond at St. John’s, Bartch was bigger and more athletic than most opponents at the Division III level. Once a tight end (four catches, 43 yards through two seasons) at 6-5, 250 pounds, he added 25 pounds (with the help of a hold-your-nose protein shake every day) to become a starter at left tackle entering his junior season, then added 40 more entering his senior year.

Bartch earned an invite to the Senior Bowl in January and didn’t hurt himself, though a knee injury kept him out of the game and from participating at the NFL Scouting Combine.

Bartch has light feet, balance and strength with legitimate quick twitch at the snap, exploding out of his stance in pass protection and run blocking. Easy mover with ideal bend to mirror and anchor. Slides easily laterally to the edge, maintaining arc with athleticism and patience. Quick, active hands to punch with coordinated movement. Climbs to the second level efficiently and can redirect, stalking his target and showing good body control to adjust in space.

Level of competition concern is steep — Bartch was bigger, stronger and significantly more athletic than D-III opponents. Lined up in the two-point stance at left tackle in an up-tempo, spread offense, making his projection inside to guard (a position he’s never played at any level) at the Senior Bowl that much more challenging. A bit inconsistent with his hand placement, getting mitts too high and outside. Quick enough, but might initially struggle with the raw power he’ll face in the NFL.

Ali Marpet, Tampa Bay Buccaneers — The adjustment from Division III to the NFL is significant, but like Marpet, a second-round pick in 2015, Bartch has all of the tools to make the leap.