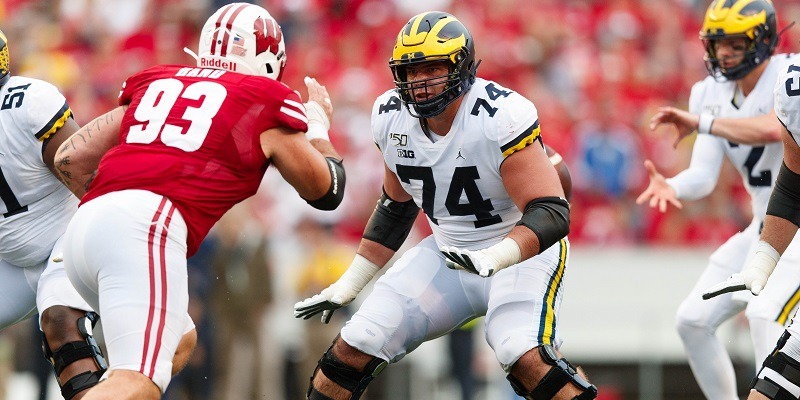 A third-team All-American in 2019, Bredeson finished with 46 career starts and multiple honors at Michigan for his toughness and academic success. Voted a two-time team captain and three-time All-Big Ten selection, he did not allow a sack or quarterback hit in 451 offensive snaps as a senior.

Bredeson had a few hiccups at the Senior Bowl before steadying. He sat out the NFL Scouting Combine due to a hamstring injury.

A boulder on roller skates with a blocky, thick, square frame, Bredeson moves well on light feet, eager to hit something. Terrific initial quickness and agility, easily sliding laterally to mirror pass rushers or to adjust late to blitzes and stunts. Light enough on his feet to consider at tackle, using short, quick steps to remain square and in front of opponents without risking a loss of balance. Sweet feet with long arms, strong hands and a command of the strike zone. He consistently pops opponents in their chest, showing the grip strength to latch and sustain blocks. Poised. Never looks out of control. Highly competitive and durable player who held his own at the Senior Bowl.

Despite quick feet, Bredeson is a better football player than athlete. Gains ground efficiently with short, choppy steps but tops out quickly and possesses just average speed for the position. Slightly shorter than some teams would prefer. Played exclusively at left guard for Michigan, raising questions about projecting him to other positions in the NFL.

Joel Bitonio, Cleveland Browns — Comparing any rookie to a Pro Bowler is dangerous, but these born-to-block linemen have the same build and temperament. Bredeson’s functional athleticism, technically refined play, proven level of competition and prototypical frame make him a great bet.