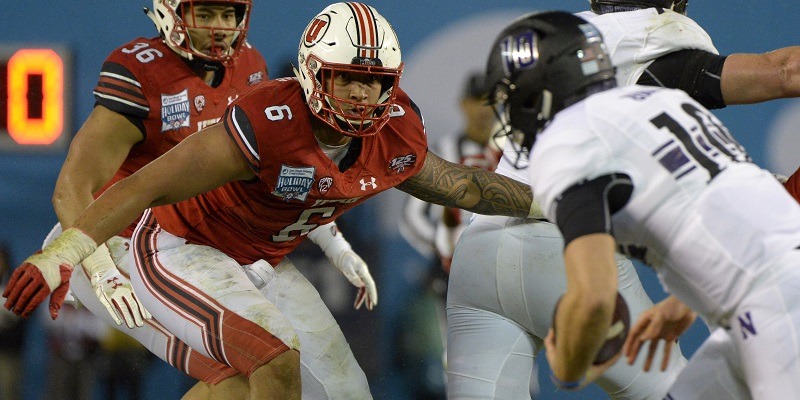 A 2019 consensus All-American and the Morris Trophy winner as the best defensive lineman in the Pac-12 (as voted by the offensive linemen), Anae led Utah in sacks in each of the past three seasons and finished with 29.5. Capped his career with 12.5 sacks in 2019 for the Pac-12 South champs.

Anae dazzled with three sacks in the Senior Bowl game, capping a very strong week. His workout at the NFL Scouting Combine was, as expected, unimpressive, as he ran the 40-yard dash in 4.93 seconds at 257 pounds.

A technically-refined and ultra-productive edge rusher, Anae specializes at doing the “little things” well. Among the best in this year’s class at timing the snap, challenging left tackles whether rushing out of a two- or three-point stance. Carries a lot of weapons in his rush tool belt, incorporating effective swims, rips, clubs, spins and push-pulls to complement his burst and power. Sports a typically compact Polynesian frame and comes off the ball low and hard, overwhelming some blockers with an effective bull rush due mostly to his use of leverage and leg drive. More agile than he looks, using an effective outside deke move before crashing back inside with a counter. Doesn’t look out of place when dropping back into coverage.

Anae is likely to be appreciated more by coaches than scouts due to a lack of “special” traits. Possesses just average size, strength and speed by modern NFL edge rusher standards. Shorter than preferred with short arms (32 1/8 inches), making him less effective in stringing out running plays and knocking down passes (just three in his career, all coming in 2018). Lacks the smooth acceleration to zip past NFL tackles on speed alone.

Jabaal Sheard, Indianapolis Colts — Just as the stubby Sheard (6-3, 268) did at Pitt prior to being selected 37th by Cleveland in 2011, Anae dominated college competition. But Anae is more of a jack-of-all-trades, master-of-none type than an athletic phenom, which may mean a slight wait on draft day before he ultimately carves out a long NFL career.