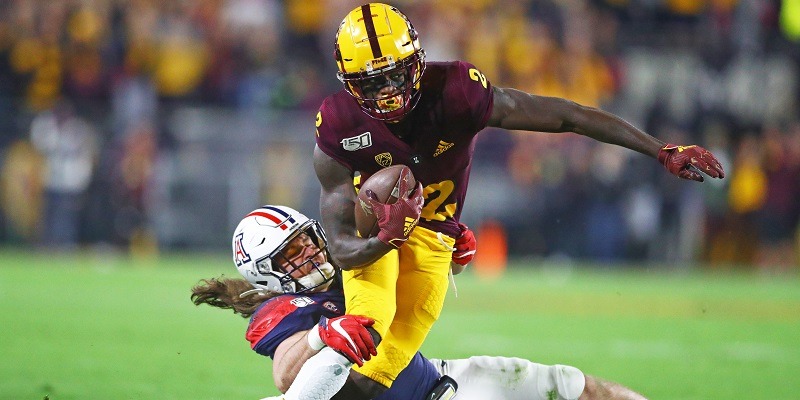 A former junior college player, Aiyuk was a 2019 first-team All-Pac-12 selection as a receiver and return specialist, catching 65 passes for 1,192 yards and eight touchdowns. He averaged 31.9 yards on 14 kickoff returns and 16.1 yards and a touchdown on 14 punt returns. The draft is loaded at receiver but few possess Aiyuk’s big-play chops.

At the NFL Scouting Combine, Aiyuk’s 40-yard dash (4.50) was good, not great, but he showed his explosiveness in his jumps, finishing top-six at the position in both the vertical (40 inches) and the broad (128 inches).

Aiyuk possesses game-changing elusiveness and straight-line speed, making him a legitimate threat to score every time he touches the ball. Short but not small, with a compact, muscled frame. Explodes off the line to instantly threaten deep and shows terrific balance and body control to easily gain separation on underneath routes. Good vision to set up his blocks, cutting back against over-pursuing defenders and challenging pursuit angles. Also shows impressive body control and sticky hands to make circus catches.

As a junior college transfer, Aiyuk has only one “dominant” season at the FBS level after playing in the shadow of 2019 first-round pick N’Keal Harry as a junior. Capable of playing multiple roles but has statistics inflated on relatively easy tunnel screens, shallow crosses and simple vertical routes designed to get him the ball quickly. Lives and dies in the improvisational game and has some head-scratching plays on tape, including freelancing as a route-runner, loosely hanging on to the ball in the open field and failing to follow blockers.