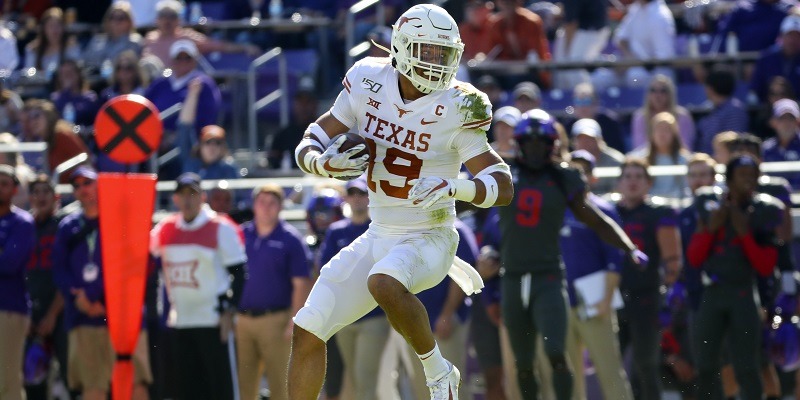 Jones started one game as a true freshman in 2016 before making 30 starts the next three seasons. A high school All-American, he was named Texas Defensive Player of the Year in 2015 by USA Today. His father, Bert Jones, played football at Stephen F. Austin. He posted a career-best 86 tackles with two interceptions as a senior in 2019 despite missing four games.

Postseason surgery to repair a torn labrum kept Jones out of both the Senior Bowl and the NFL Scouting Combine.

A compactly built, fluid athlete, Jones has impressive change-of-direction and acceleration to handle coverage duties against NFL receivers. Versatile defender asked to play multiple roles in Texas’ scheme. At his best covering one-on-one, demonstrating silky smooth turn and run capabilities as well as good route recognition and ball skills. Easy mover with light feet and a clean backpedal. Doesn’t panic with the ball in the air, competing at the catch point and incorporating strong hand-eye coordination to rip it away. Takes sharp angles to the ball in pursuit and is a generally reliable tackler, tripping up ball carriers seemingly out of his grasp with long arms to lasso their feet. Attacks blocking receivers, using forceful hands and good coordination in his lower half to rip himself free quickly.

Though in on a lot of tackles, Jones is too often a duck-and-swipe ankle-biter rather than taking the bull by the horns and proving the forceful hitter his size suggests. Too reckless with his angles in pursuit, leaving his teammates in a lurch if he doesn’t make the tackle, himself. Isn’t the consistent team defender that his all-conference and captain roles indicate, failing to protect the boundary and force ball carriers back inside (where his pursuing teammates are coming to help) too often (Oklahoma State, LSU). Zero interceptions in his first 23 games.

Tashaun Gipson, Houston Texans — Jones possesses the size, agility, speed and ball skills NFL teams prioritize in safeties. Like Gipson, he lacks consistent physicality and the open-field tackling security to be a fit for everyone.