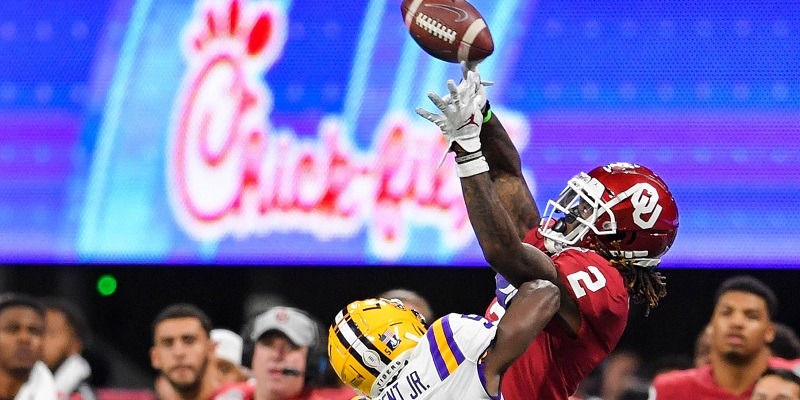 A consensus 2019 All-American, Lamb was incredibly productive under Lincoln Riley, finishing his Sooners career with 173 catches for 3,292 yards and 32 touchdowns. He had 24 career receptions that covered at least 40 yards, finishing with a 19.0-yard average for his career, and added an additional touchdown on the ground in 2019.

Lamb was merely OK in the testing drills at the NFL Scouting Combine, with a decent 40-yard dash (4.50) and underwhelming jumps (34 1/2-inch vertical, 124-inch broad), but he looked outstanding in the positional workout.

Lamb is an accomplished route-runner who shows quickness and coordination to slip by press coverage and easily get into his route. Varies his gait nicely, showing impressive balance and agility at the stem to give cornerbacks no early tells on his plans, as well as terrific short-area quickness. At his best with the ball in flight, able to snake his hands around, between or over those of defenders to consistently win contested situations. Anticipates defenders beautifully, spinning away from the oncoming contact to create huge yards-after-catch opportunities. Experience as a returner shows with his vision, ability to set up blocks and willingness to cut back against the grain. Stronger than his slim frame suggests, brushing past arm tackles and showing the balance to regain his feet.

Though he remained healthy at Oklahoma, Lamb’s relatively slim frame is a bit disconcerting. Production certainly inflated by Oklahoma’s spread attack, which often got him the ball in space and on the move. Was not asked to run a full route tree and may need some time acclimating to a more diverse attack. Accelerates smoothly but was caught from behind, at times.

Robby Anderson, New York Jets — Lamb isn’t as fast and has proven much more consistent at Oklahoma than the 6-3, 190-pound Anderson in the NFL (or previously at Temple), but the two both have a slim frame, silky smooth athleticism and natural playmaking ability.