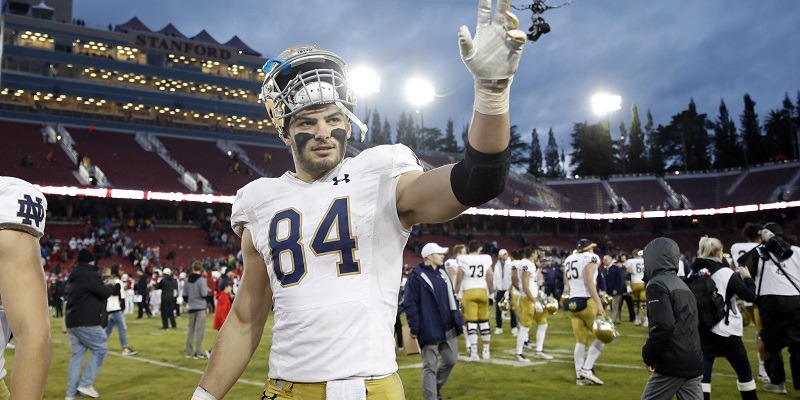 Kmet missed the first two games of the 2019 season due to a broken collarbone, finishing with 43 catches for 515 yards and six TDs. He was a two-way athlete at Notre Dame, also starring as a relief pitcher and had been considered a highly regarded MLB prospect. He has NFL bloodlines: His father, Frank Kmet, a defensive lineman, was drafted in the fourth round in 1992 by Buffalo. Kmet’s uncle is Jeff Zgonina, who played 17 NFL seasons on the defensive line for seven teams.

As expected, Kmet ran just OK in the 40-yard dash (4.70) at the NFL Scouting Combine, but his vertical leap (37 inches) led all tight ends.

Kmet is an impressive looking athlete, with broad shoulders, a well-developed V-frame and long limbs. Shows the coordination and quickness of a much smaller man. Glides off the line of scrimmage when not challenged, shifting gears to attack the seam or sharply breaking off to create separation against overmatched defenders. Good core strength and flexibility to fight through traffic and still effectively get into his route, remaining effectively open to his quarterback the entire time simply due to his height advantage. Plays even bigger than his size with the ball in the air. Competes with a “my ball” mentality and shows good timing and explosiveness in his leaps, body control to contort and battle at the rim with strong, secure hands. An effective downfield blocker who shows good awareness and agility to set up blocks. Improved punch and sustain at the line of scrimmage in 2019, with the frame and competitiveness to project improvement in this area as he gains greater mass and strength.

While a smooth mover once he gets going, Kmet is often a tick late off the snap. Athleticism is merely good, not great, limiting his ceiling. Effective in scooping up assignments at the second level as a blocker but currently lacks the sand in his pants to hold up as an inline blocker. Improved at the point of attack in 2019 but still needs to add more power to his punch and overall strength.

Jack Doyle, Indianapolis Colts — Like the 6-6, 262-pound Doyle, Kmet is a smoother athlete and receiver than the burly blocker his prototypical frame suggests. Kmet, however, is more aggressive at the catch point and would be expected to have more than the 18 career touchdowns Doyle has accumulated in his seven seasons.