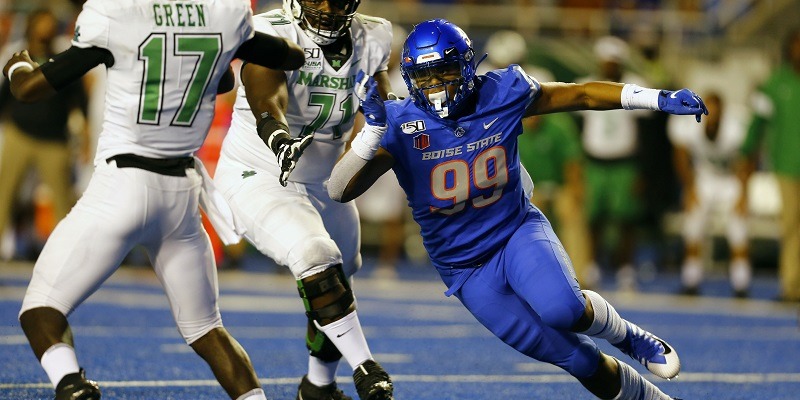 Weaver became the Mountain West record-holder for career sacks with 34 in three seasons at Boise State, spanning 40 games. He registered 52 tackles (19.5 for loss), 13.5 sacks and one interception in 14 games in 2019 before declaring early.

Though disappointing in the jumps at the NFL Scouting Combine, Weaver showed excellent quickness in the 3-cone drill (7.00 seconds) and short shuttle (4.27). He did not run the 40-yard dash.

Weaver is an explosive athlete with the ability to beat offensive tackles with speed and bend around the edge. His counter move to his speed rush is a spin move, which is effective. He does a good job of keeping his eyes on the quarterback when rushing the passer and doesn’t lose track of where he is on the field, which eliminates escape lanes. Once Weaver gets his hands on the quarterback, the play is over. He has strong hands and is a great finisher. He has a high motor and doesn’t get frustrated when he’s getting chipped or double teamed.

Weaver doesn’t have the prototypical body type for an edge rusher, as he carries some bad weight around the midsection and lacks length (6-foot-2, 32 3/8-inch arms). His athleticism might be overstated due to facing lighter competition. While a willing run defender, he too often leads with his shoulders instead of his hands, which allows him to be blocked on plays when he shouldn’t. Occasionally undisciplined in trying to pin his ears back to rush the passer, leaving him susceptible to running plays on the tackle’s outside hip. He has experience in coverage, but is not the most fluid in that department.

Brandon Graham, Philadelphia Eagles — There aren’t many stud pass rushers with Weaver’s body type, but Graham (6-foot-1, 268 pounds with 32 1/4-inch arms) was very similar physically coming out of Michigan. Graham was a better run defender but still took a while to blossom in the NFL, so Weaver might need time to adapt.