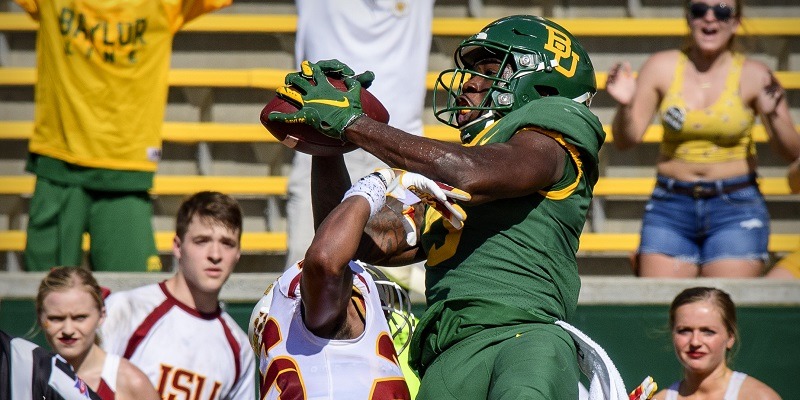 Mims was a starter for the past three seasons for the Bears, with 182 grabs for 2,901 yards and 28 touchdowns over that span. He earned first-team All-Big 12 honors as a senior, when he totaled 12 TDs.

Mims was outstanding the pre-draft process, drawing major buzz at the Senior Bowl before delivering an outstanding workout at the NFL Scouting Combine. He tied for third among all wideouts in the 40-yard dash (4.38 seconds), tied for fourth in the broad jump (131 inches) and tied for eighth in the vertical jump (38 1/2 inches), while his 3-cone drill (6.66 seconds) was the best of any player in Indianapolis.

Mims brings a ton to the table that NFL evaluators will like. Not only is he extremely toolsy, but he’s also been very productive. An excellent combination of size, length and speed, with long arms, smooth body control and sticky hands. He regularly makes highlight-reel grabs over defenders or near the sideline and in the end zone. The former track athlete is surprisingly fluid as a runner, breaking tackles and eating up yards with long strides. He can separate with quickness or physicality — sometimes both.

Like many Baylor receiving prospects before him, Mims remains raw and must develop significantly as a route-runner. His lankiness can be an issue when he tries to gear down for sharp cuts, and he doesn’t always show discipline at the top of his stem, rounding some corners and leading defensive backs to the route.

Hakeem Butler, Arizona Cardinals — Butler was a toolsy-but-raw prospect coming out of Iowa State last year, with the potential to develop into an X receiver. He slipped because of concentration drops and a lack of refinement, then missed his rookie season with a thumb injury. Mims isn’t quite as big but offers a similar combination of catch radius and fluidity, with the chance to become a star with development.