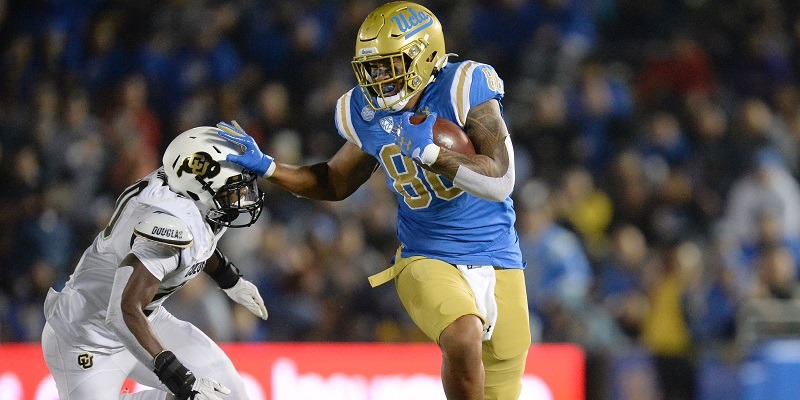 A former four-star recruit who initially signed with Michigan, Asiasi spent one year in Ann Arbor (playing in all 13 games in 2016) before transferring back home to California. He made six catches for UCLA in 2018 after a redshirt season before flashing in 2019 with 44 catches for 641 yards and four touchdowns.

Asiasi was up and down at the NFL Scouting Combine, finishing in the middle of the pack in the 40-yard dash (4.73) but posting the worst vertical leap (30 1/2 inches) and one of the worst broad jumps (115 inches).

Asiasi is a powerfully built tight end who offers intriguing athleticism and untapped potential. Smooth off the snap, showing good core flexibility to dip and slip by defenders attempting to jam, as well as surprising suddenness in his acceleration and breaks. Moves well for a big man, including when hurdling over defenders (Utah) or racing past them (USC). Can open up and get moving very well, presenting a difficult matchup for opponents. Naturally powerful blocker who delivers a strong initial pop on defenders with the lateral agility and balance to shuffle and mirror. Terrific core flexibility and length to make late adjustments, recovering on snaps in which he appears to be beaten.

Not yet the sum of his parts, Asiasi too often relies on his natural gifts to make plays and forsakes technique, resulting in the kind of inconsistent play that can drive coaches crazy. Currently raw in his route-running, often tipping off his plans. Fails to anticipate defenders’ moves as a downfield blocker and tends to get his hands too far extended. Has his share of concentration drops. Could add some glass to his diet, failing to finish blocks at times and allowing smaller defenders to knock him down in the open field.

Austin Hooper, Atlanta Falcons — Though he’s since developed into a Pro Bowler, Hooper was viewed as a bit of a project when coming out of Stanford in 2016, lasting until the 81st overall selection. Asiasi flashes this kind of potential.