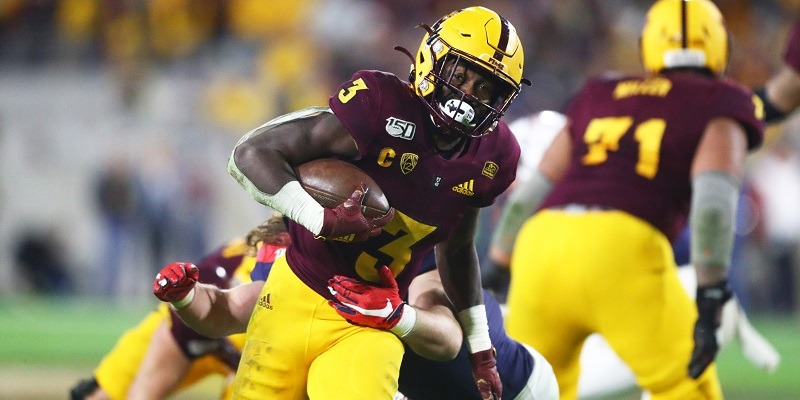 Benjamin burst onto the scene as a first-year starter in 2018, setting the Sun Devils’ single-season record with 1,642 rushing yards, the single-game record with 312 yards vs. Oregon State and earning third-team AP All-America honors. With a new quarterback and shaky offensive line in 2019, Benjamin dropped to 1,083 yards (4.3 per carry) last season.

Benjamin stood out at the Senior Bowl for his quickness and hands. At the NFL Scouting Combine, his 40-yard dash (4.57 seconds) was mediocre, as expected, but he tied for fifth among running backs in the vertical jump (39 inches) and was second in the 3-cone drill (6.97).

Benjamin is a bowling ball of a running back with a compact but surprisingly powerful frame, good lateral agility and balance. Quick to and through the hole, showing vision and burst. Shifty without being a finesse back. Good jump-cuts and altered gaits to keep defenders on their heels, and he likes to bury his shoulder into their chest once they do so, showing good forward lean and leg drive to rack up tough interior yards. He’s not a true speed threat but accelerates quickly and has enough speed to beat linebackers to the edge. Agility and burst also stand out as a receiver out of the backfield, where he caught 82 passes for 625 yards and four touchdowns over his career.

Lacks the frame to handle the same bell-cow duties in the NFL that he had at Arizona State, where he racked up 658 total touches in just over two seasons of starting action. More shifty than speedy, relying on his vision and feel to set up defenders rather than boasting the elite short-area quickness to consistently make them miss in tight quarters. Quick to the hole but tops out and lacks the breakaway element many teams expect out of a potential change-of-pace option. Fumbled six times in 2019 (losing five) after losing just one of three fumbles in his first season as the Sun Devils’ starter.

Kenjon Barner, Atlanta Falcons — Like Benjamin, Barner was highly productive as the featured back in an explosive Pac-12 offense. The sledding has been more difficult for Barner in the NFL since being drafted in the sixth round in 2013, playing second (or third) fiddle behind bigger, faster backs.