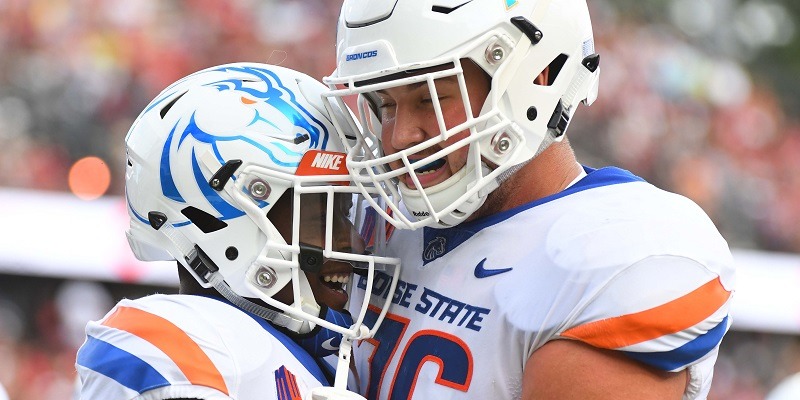 A three-year starter at offensive tackle in Boise State’s up-tempo scheme, Cleveland is still growing and getting better. A two-time All-Mountain West first-team selection at left tackle, his NFL fit will be determined by the scheme for which he’s drafted.

He helped himself at the Senior Bowl against pro-caliber competition, then was outstanding at the NFL Scouting Combine finishing third among O-linemen in the 40-yard dash (4.93 seconds) and first in the short shuttle (4.46).

Cleveland looks the part of an NFL offensive lineman, with broad shoulders, at least adequate arm length (33 3/8 inches) and a trim, well-distributed musculature. Good initial quickness and lateral agility to mirror, smoothly sliding to his left off the snap to protect the arc. Coordinated footwork and patience to handle counters back inside, keeping his frame square to opponents. Tall but plays with excellent knee bend. Impressive core strength, flexibility and balance to absorb bull rushers, growing roots into the turf to anchor. Physicality and grit show up in the running game. An imposing blocker at the second level, showing the initial quickness and agility to stalk and secure downfield targets. Can also push the pile.

While smooth in his pass sets, Cleveland does not offer elite initial quickness for a tackle and doesn’t play quite as athletic as he tested. Will be exposed timing the snap to be in position to stonewall edge rushers at the next level. Doesn’t quite have the second gear and length to recover if beaten off the snap. Showed improved hand placement and strength in 2019 but still needs work in this area, spraying his hands too high, low and outside. If moved to guard, needs more nastiness in his finish, too often seeming satisfied with a stalemate.

David Bakhtiari, Green Bay Packers — In some schemes, Cleveland would be purely a guard, and in this class of offensive tackles, he could get overlooked a bit. He is more smooth than sudden and has good but not elite size and strength, similar to how Bakhtiari was viewed when the Packers nabbed him 109th overall back in 2013.