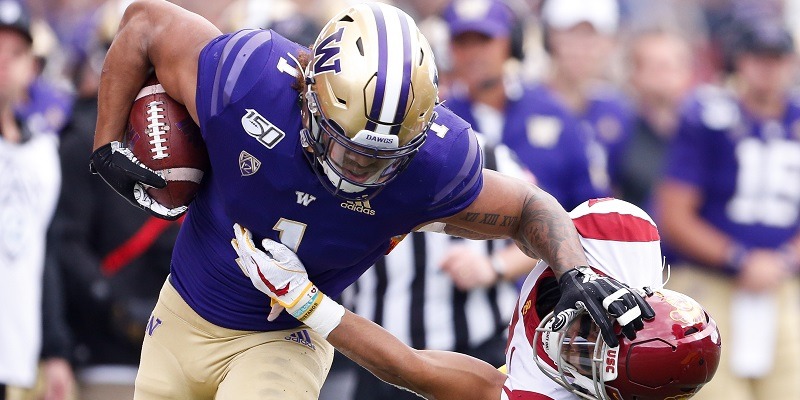 Bryant missed eight games in 2018 because of ACL surgery on his left knee but came back for a big junior season, in which he caught 52 passes for 825 yards, earning first-team All-Pac-12 honors. He averaged 16.4 yards per catch for his career and scored five touchdowns.

Bryant was one of the bigger disappointments at the NFL Scouting Combine, finishing below average in the 40-yard dash (4.74) and vertical (32 1/2 inches) and broad (115 inches) jumps, although his 3-cone time (7.08) was among the best by a tight end.

A moveable chess piece, Bryant can line up wide, in the slot, on the wing, at fullback or as a traditional inline tight end. His broad shoulders and long arms present all sorts of problems for defensive backs in one-on-one situations. Strong hands, along with good hand-eye coordination and body control to pull it down in contested situations. Ascending route-runner with the suddenness and steady acceleration to pull away from most linebackers. Good stalk blocker at the second level, latching onto linebackers and defensive backs with hand placement, grip strength and leg drive.

Bryant is more of a jack-of-all-trades, master-of-none type at this point. Lacks the gravity to hold up at the point of attack as an extra offensive lineman, getting rag-dolled at times. Does not show the grit to be a human sledgehammer as a true fullback conversion, nor the speed to handle outside receiver duties for most schemes. Shows disappointing initial quickness off the ball whether lined up in a two- or three-point stance. Despite explosive moments on tape, tested surprisingly poorly.

Charles Clay, Arizona Cardinals — Like the 6-3, 246-pound Clay, Bryant has a unique frame and game that make him a matchup concern for the defense. He projects best as a big slot receiver or H-back, showing the ability to make contested grabs that could help him carve out a solid NFL career, like Clay, a nine-year veteran.