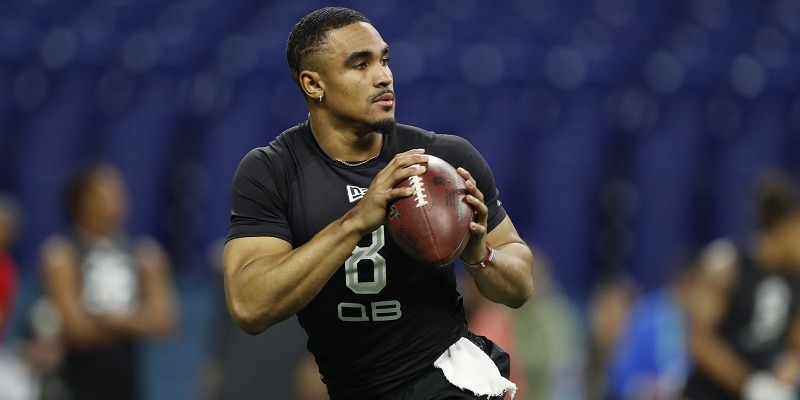 It didn’t seem likely that Nick Saban would choose a true freshman as his quarterback in 2016, when Hurts competed in the spring with Cooper Bateman, David Cornwell and Blake Barnett. But there was Hurts in the starting lineup in the second game of the season, and he went on to become the SEC Offensive Player of the Year, going 13-0 as the starter before a 35-31 loss to Clemson in the national title game.

Hurts’ name is writ large over the past four seasons of college football, as he directed Alabama back to the national championship game in 2017 before Tua Tagovailoa came off the bench to deliver the win. Hurts was a no-drama backup in 2018 but was ready for his moment when he stepped in for an ailing Tagovailoa and rallied the Tide over Georgia in the SEC Championship Game. His 2019 season at Oklahoma ended in a fourth consecutive playoff appearance for Hurts and a runner-up finish to Joe Burrow in Heisman balloting.

Hurts said at the NFL Scouting Combine he wouldn’t consider a position switch and threw the ball well in position drills.

Excellent athlete for the position, possessing above-average straight-line speed, elusiveness, vision, balance through contact and toughness. Big and athletic enough to warrant exploring a conversion to receiver, running back or safety if quarterback doesn’t work out, but he does possess plenty of arm strength to make every throw, rifling long passes to the opposite sideline. Can drop his arm slot and snap off quick BBs through tight windows, taking advantage of defenders caught in the middle between coverage and rushing toward him in run support.

Has off-the-charts football intangibles. Staff and teammates at Alabama raved about his composure from the sideline as the team transitioned to Tua Tagovailoa in the 2018 season, and the trend continued at Oklahoma, where he was named one of four team captains in 2019 after he joined the team as a graduate transfer.

Possesses only zip-code accuracy, routinely forcing his receivers to adjust to poorly thrown and mis-timed balls – very much on display at the Senior Bowl — that limit yards after the catch. Impressive completion percentage at OU was inflated by easy quick screens and dump-offs to backs. Possesses a compact frame well-suited to absorbing punishment but has below-average height for the position.

Too reckless with the ball, holding on to it too long and earning ugly sacks or throwing late into coverage and risking turnovers. Needs to do a better job of protecting the ball as a runner, rarely covering it with both hands and putting it on the ground too often.

Taysom Hill, New Orleans Saints — Like the 6-2, 221-pound Hill, Hurts is a backyard improvisational dual-threat weapon whose legs (and leadership) are his defining traits. A creative offensive coordinator may find a role for him, but Hurts currently lacks the accuracy from the pocket to fit most NFL teams.