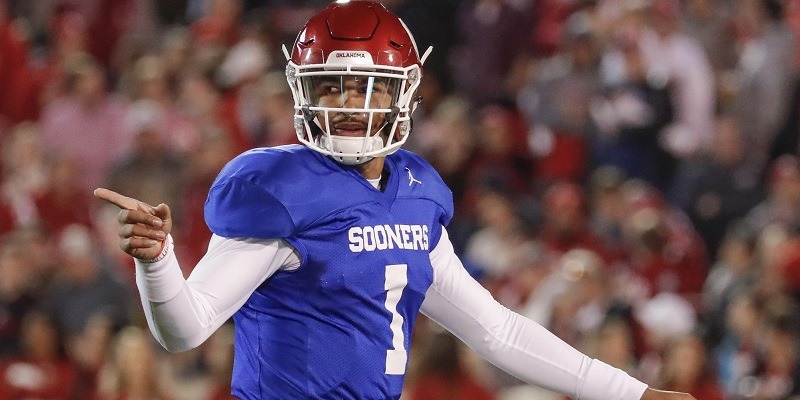 Jalen Hurts made a visit to the Oklahoma Sooners on Saturday, according to multiple reports.
Hurts, the Alabama quarterback who announced Wednesday that he has entered the NCAA transfer portal, began making trips to potential transfer schools this weekend — starting Friday with a visit to Maryland.
After that, he apparently headed to Oklahoma, which is looking to replace Heisman Trophy winner Kyler Murray.
“I can confirm that Alabama QB Jalen Hurts was in Norman today visiting Oklahoma. Austin Kendall is also in Norman today. Classes start Monday,” tweeted Jason Kersey, who covers Oklahoma for The Athletic.
Kendall saw limited action this season as Murray’s backup. Oklahoma reportedly began to show interest in Hurts after Kendall entered the transfer portal on Friday.
Hurts also was expected to visit Miami over the weekend, according to an ESPN source.
The graduate transfer, who can play immediately next season and has one year of eligibility remaining, attended the Maryland basketball game against Indiana on Friday night. He joined Terrapins head football coach Mike Locksley, who was Alabama’s offensive coordinator in 2018.
Dan Enos, the quarterback coach at Alabama who worked closely with Hurts, was hired Friday to be offensive coordinator of the Miami Hurricanes.
Hurts, a native of Houston, compiled a 26-2 record as Alabama’s starting quarterback before Tua Tagovailoa was given the job this season. Playing in all but two games as a backup, Hurts completed 51 of 70 passes for 765 yards, with eight touchdowns and two interceptions.
The 2016 SEC Offensive Player of the Year has completed 62.9 percent of his passes in his Alabama career for 5,626 yards, 48 touchdowns and 12 interceptions in 42 games.
–Field Level Media