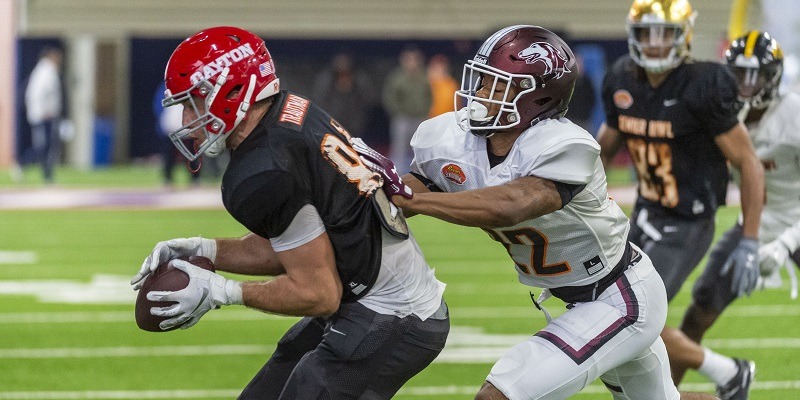 Chinn comes from a small school, but he’s already been tested against the likes of A.J. Brown and Dallas Goedert while playing for the Salukis. He began his career at cornerback and moved back and forth to safety and boundary corner, finishing as a two-time all Missouri Valley Football Conference (FCS) pick.

Chinn stood out at the Senior Bowl, even dabbling at linebacker and cornerback, and then had one of the NFL Scouting Combine’s best performances. Only one player in Indianapolis bested his broad jump (138 inches), and only one safety bested his vertical (41). His 40-yard dash (4.45 seconds) tied for third-best among safeties.

Chinn looks the part, with prototypical size, broad shoulders and a rangy, athletic frame. Gliding, effortless runner who alters his gait and speed to easily run with FCS opponents. Long arms and terrific hand-eye coordination to slap passes away as they arrive. Excellent ball skills, intercepting 13 of the 31 passes he got his hands on during his college career. Length also comes into play as a tackler, with the wingspan to swallow up ball carriers. Competitive, wrap-up tackler who can deliver a blow when he has a lane. Good strength to make drag-down tackles while still engaged with blockers. Aggressive around the pile, ripping at the ball when teammates gang tackle opponents. High marks for intangibles. Coaches and teammates rave about his maturity and commitment.

Has a smooth, deceptive gliding running style, but Chinn loses a step in his transition and tops out quickly, raising doubts about his true speed even after strong testing. Played free safety (and some cornerback early) at SIU but might project better to strong safety. Some teams view his best position fit as linebacker, where he would be a true projection, with zero snaps there for the Salukis. History of sitting with minor injuries, including two games in 2019 (foot), two games in 2018 (hamstring) and three games in 2016 (shoulder).

Micah Hyde, Buffalo Bills — Questions about Hyde’s straight-line speed pushed him into the fifth round. Chinn, who is a bigger and tested quite well, will get his opportunity to quiet critics and prove that his playmaking mentality and commitment can make him a long-time starter in the NFL.