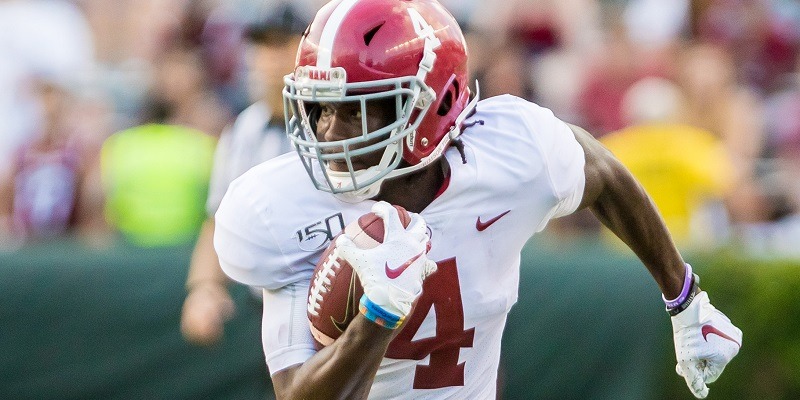 A two-time All-American and the winner of the 2018 Biletnikoff Award as the nation’s top receiver, Jeudy finished his Alabama career with 159 receptions for 2,742 yards and 26 touchdowns. He capped his career with a 204-yard effort on six catches against Michigan in the Citrus Bowl, including a 85-yard score on the first snap of the game when he blasted past his defender. He was a five-star prospect coming out of Deerfield Beach (Fla.) High School.

Jeudy had a solid, but not spectacular, performance at the NFL Scouting Combine, finishing just outside of the top 10 in most drills. His route-running was among the best in Indianapolis.

Rarely do you find a college wide receiver with so much polish. Jeudy is an exquisite route-runner, with a wide array of releases and a feel for getting in defenders’ blind spots or setting them up before his break. Jeudy also brings excellent athletic traits to the position, with some of the twitchiest feet you’ll see. He has terrific quickness in and out of his breaks, as well as the deceleration to quickly separate on curls and comebacks. He’s also one of the faster players in the country, with the ability to turn a small seam into a long touchdown after the catch. He’s deadly on deep posts and go routes, just running away from outside-leverage cornerbacks. He has consistent hands and he rarely lets the ball into his body.

Jeudy does have some drops at times, mostly a matter of concentration (turning upfield too quickly). His slight frame might concern some scouts about durability, and while he attacks the ball well in the air, he inherently doesn’t have the size to consistently win contested catches. Like most college wideouts, he’ll need to get stronger and more creative once he faces more press coverage in the NFL. More strength would also help him maintain position better against tight coverage. Some believe he’s best suited in the slot at the next level.

Antonio Brown, free agent — Jeudy reminds a little bit of fellow Alabama wideout Calvin Ridley, but he’s a much better athlete and a bit bigger. The precision of his routes and lightning-quick feet correlate well to Brown, whose off-field transgressions have kept one of the league’s toughest covers off the field. Also like Brown, Jeudy is a terror after the catch due to his speed and quickness.