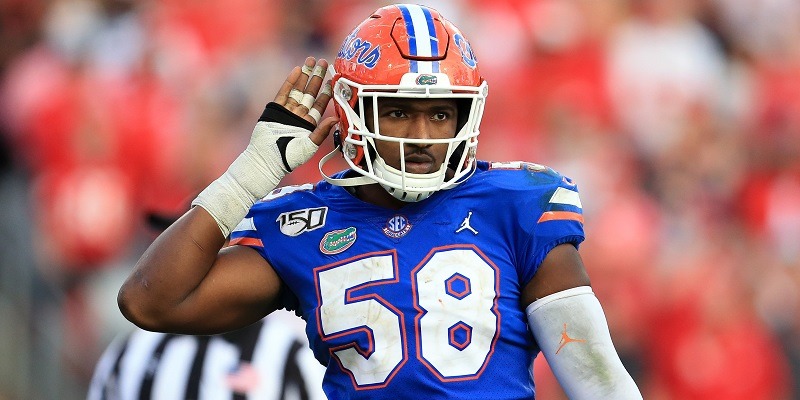 Greenard excelled in his one season at Florida as a grad transfer from Louisville, posting 15.5 tackles for loss and 9.5 sacks among his 52 tackles in 2019. That was a nice comeback after he suffered a season-ending wrist injury at Louisville on the first defensive series of the 2018 season. In 2017, he had 15.5 TFLs and seven sacks.

Greenard had a very strong week at the Senior Bowl, then was up-and-down at the NFL Scouting Combine. While his 40-yard dash (4.87 seconds) and jumps weren’t impressive, he finished second among D-linemen in the 3-cone drill (7.13) and tied for third in the short shuttle (4.34).

A scheme-versatile player, Greenard should be able to operate both as an outside linebacker and a true defensive end. Brings a deep arsenal of counters and always leaves opponents guessing as to what he’ll use next. Solid lateral mover and looks slick on stunts. Muscled-up frame; looks the part of an NFL edge rusher, with outstanding length (34 7/8-inch arms). Functional enough in coverage to work it in emergencies, although he shouldn’t be asked to do it often.

Greenard doesn’t flash the bend to turn back into the pocket and slide past offensive tackles. Wins with his hands a lot more than he wins with physical gifts. Not an easy mover in space. Poor tackler who slips off too many attempts. Too often overwhelmed when trying to break free in the run game. Upper-body strength isn’t enough to finish tackles from difficult angles. Plays too tall and allows tackles to get under his pads, getting washed out against the run.

Carl Lawson, Cincinnati Bengals — Lawson doesn’t seem to get his due as a rotational edge rusher in Cincinnati, but he’s proven himself worthy of snaps with 14.5 sacks in his first three seasons with the team. Greenard is not as sawed-off, but he brings similar upfield burst and hand activity as Lawson. Greenard’s lack of impact in the run game could take him off the field on run downs, but he should contribute early as a pass-rusher.