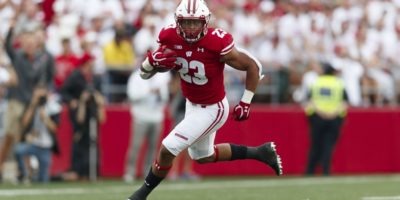 If you want production, you won’t find better than Taylor. His 6,174 rushing yards for the Badgers set a benchmark for the most in college football history through three seasons, exceeding Herschel Walker’s record by more than 500 yards. He topped 2,000 yards in each of the last two seasons while totaling 50 rushing touchdowns for his career. Taylor caught 26 passes for 252 yards and five scores in 2019 after notching just 16 catches through his first two years.

Taylor then tore up the NFL Scouting Combine, leading all running backs with a scorching 4.39-second 40-yard dash and finishing fourth in the 3-cone drill (7.01) and sixth in the 20-yard shuttle (4.24).

It’s hard not to love Taylor as a runner. He’s well built and shows terrific power, bullying defenders and showing excellent balance through contact to continue his path. He also has light feet, subtle quickness and the acceleration and long speed to pull away in the open field. His experience shines through in his patience and instincts, as he routinely feels holes open up and hits them at the proper time. He handled a massive workload over three seasons without any significant injuries or decline in effectiveness, finishing at 6.7 yards per carry for his career. He shows great power as a pass protector and improved as a receiver in his final season, helping round out his skill set.

While he hasn’t had any major injuries, Taylor already has 968 touches on his odometer, so most teams won’t expect him to retain value through his second contract in the NFL. Like many other Wisconsin backs, he benefited from a great offensive line, breaking off several big runs by waltzing through huge holes. He’s not ultra quick laterally, so poor blocking could create negative plays. Despite his dedication to improving as a receiver, Taylor’s route-running needs polishing, especially as he expands his route tree. He absolutely must improve his ball security, as he had an alarming 18 fumbles (one every 53.8 touches) with the Badgers.

Leonard Fournette, Jacksonville Jaguars — Taylor isn’t quite the physical freak Fournette was at LSU, but he projects as a similar player to what Fournette has become in Jacksonville. They have a comparable combination of power and explosiveness in the open field, and Taylor is likely to fill a similar role in the NFL as a heavy-carries lead back who could add to his workload with continued progress as a receiver.