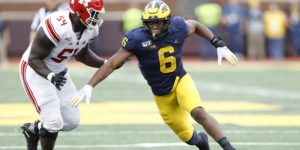 A two-time All-Big Ten selection, Uche had some stellar individual showings as a senior, including three sacks against Illinois and an eight-tackle game against Army. He started only nine games in four seasons but earned a reputation as a solid edge player against polished blockers in the Big Ten.

Some felt Uche could have boosted his draft standing with another year — and defined role — at Michigan, but scouts came away impressed with his versatility and explosive lower half at the Senior Bowl. He did not participate in on-field drills at the NFL Scouting Combine due to a hamstring injury.

Uche is a compact edge rusher who wins with burst, agility and underrated strength at the point of attack. Possesses the requisite snap anticipation and initial burst to cross the face of tackles, generating explosiveness out of the two-point stance from either the left or right side. Accelerates smoothly and can convert speed to power to blow through the reach of pass blockers outweighing him 70 pounds or more. Good lateral agility and balance to quickly counter inside with some hand play. Surprisingly effective bull rusher due to his long arms (33 5/8 inches), proper pad level and good leg drive. Good strength to rip down ball carriers nearby. Wasn’t asked to drop into coverage but appeared capable as a strong-side ‘backer at the Senior Bowl, showing balance, good change of direction and burst.

Uche is mostly a one-trick pony as an undersized and ill-refined pass rusher. Reliant on his burst to get tackles on their heels and is too easily swallowed up when his speed isn’t effective. Just average power and technique with his hands given his playing experience and caliber of coaching received. Once tackles latch on, it is generally game over for Uche, though he does show hustle to spin free and pursue downfield. Has some medical issues in his past, including missing time in 2016 with a torn meniscus, and fall camp (2017) due to a stress fracture in his foot.

Kylie Fitts, Arizona Cardinals — Like the slightly larger Fitts (6-4, 260), who played his collegiate ball at Utah, Uche’s most appealing characteristic is his ability to wreak havoc off the edge. Neither player is a truly dynamic athlete, and both were slowed with various injuries during their productive collegiate careers.