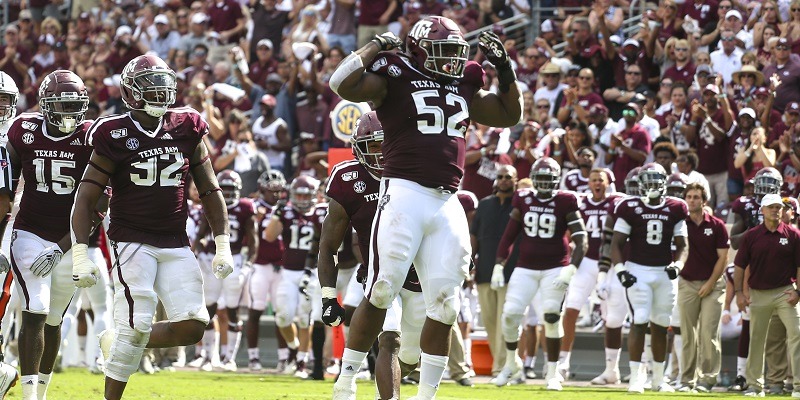 A four-star recruit, Madubuike redshirted in 2016, made 20 tackles in 2017 and then put together back-to-back outstanding seasons at Texas A&M. His redshirt sophomore season ended with 10.5 tackles for loss and 5.5 sacks. It was more of the same in 2019 — 11.5 tackles for loss, 5.5 sacks and a smattering of big plays.

Broad-shouldered with a strong, thick base, Madubuike boasts an intriguing combination of first-step quickness and power. He is a natural penetrator who can slip through gaps to wreak havoc behind the line of scrimmage, springing off the snap quicker than some of the offensive linemen who know the snap count, twisting his frame to get skinny and locating the ball quickly. Madubuike is every bit as powerful as his frame suggests. Plays with proper pad level and lower-body strength to create a pile and clog up rushing lanes. Good awareness and effort in pursuit, fighting to the whistle by spinning through blocks and hustling laterally and downfield. Effective drag-down tackler who arrives with a thud. Good hand-eye coordination and hand strength to rip the ball free, forcing five fumbles in three seasons at Texas A&M.

Madubuike has only average size in this era of behemoth defensive linemen. While quick initially, he tops out after just a few steps and possesses some stiffness in his core, struggling to change directions fluidly enough to effectively stalk ball carriers from behind if his initial rush doesn’t result in a collision. Moved up and down the line of scrimmage to create advantageous matchups but does not possess the sustained speed to handle outside duties consistently.

Kenny Clark, Green Bay Packers — Characterizing Madubuike or Clark as simply run-stuffers fails to give either enough credit for the initial quickness that is just as critical to their game as their square-ish frames and strength. Madubuike isn’t likely to post the kind of individual statistics to warrant Pro Bowl consideration, but he projects as a quality starter on the interior after showing consistency against quality competition.