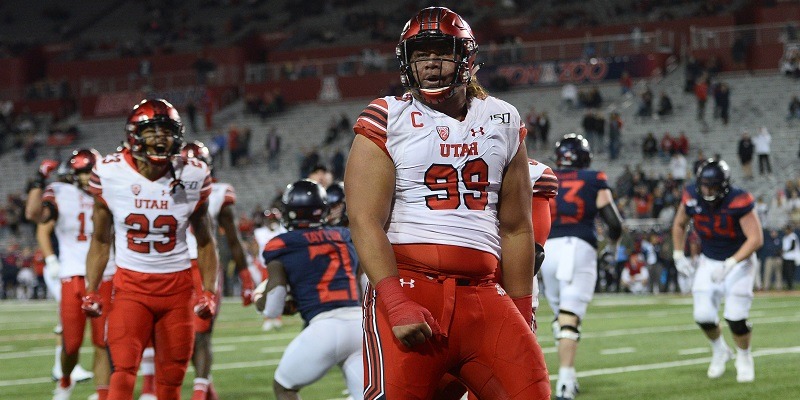 With a strong Polynesian build — his family is originally from Tonga — Fotu earned first-team All-Pac-12 honors in the past two seasons, helping Utah win the Pac-12 South in both years. He picked up multiple second-team All-America honors as a senior, when he had nine tackles for loss among his 29 stops. He finished with career totals of 85 tackles (18 for loss) and 4.5 sacks.

Fotu accepted an invitation to the Senior Bowl but was flagged on his physical and didn’t participate. At the NFL Scouting Combine, he ran an impressive (considering his size) 5.15-second 40-yard dash but posted a relatively modest 21 bench press reps of 225 pounds.

Fotu is a naturally massive man with broad shoulders and tree trunks for limbs. Surprisingly quick off the snap, demonstrating enough initial burst to split gaps if left uncovered. Greatest asset is his raw size and strength combination, allowing him to eat up blockers while teammates wreak havoc. Fotu isn’t just country-strong, he’s technically-sound, utilizing an effective push-pull technique to wrench himself free, as well as an effective over-arm swim move. He isn’t fast, but he shows impressive short-area burst to close when the ball is near and arrives with bad intentions, exploding into ball-carriers to create eye-popping collisions. Scheme versatile.

While quicker and more agile than he looks, Fotu won’t be mistaken for a consistent pass-rush threat. Too often he loses the leverage advantage and appears content with holding up at the point of attack and waiting for the ball to come toward him. Likewise, Fotu too often fails to use his length effectively to make an impact in the passing (or kicking) game, making him a bit of a one-trick pony.

Eddie Goldman, Chicago Bears — If Fotu played his college ball at a more nationally recognized program (like Goldman did at Florida State), the massive mauler might be a household name by now. Instead, he will be more valued by NFL teams than the analytics crowd or media, likely earning a Day 2 selection.