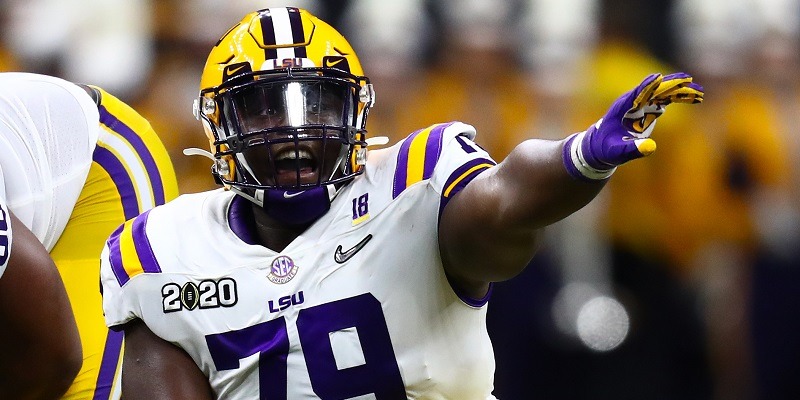 Cushenberry received All-America recognition as a junior before declaring for the 2020 NFL Draft, having started 27 consecutive games. LSU went 24-3 with him at center, with that stretch including Heisman winner Joe Burrow’s entire starting career with the Tigers.

Cushenberry was adequate in the 40-yard dash (5.27) and the bench press (25 reps) at the NFL Scouting Combine but did not do additional testing.

Cushenberry is a coordinated athlete for the position, proving significantly quicker than his blocky frame suggests. Very good snap-to-step quickness, surprising opponents on down-blocks and easily climbing to the second level, where he shows awareness and balance in adjusting to moving targets. Slides left and right easily to mirror defenders. Good awareness to recognize late blitzers and the quickness and length to win when under siege. Good size for the position, including long arms and big hands to latch onto defenders. Gets knocked back but typically recovers in time, sprawling to anchor. Accurate shotgun snapper. Athletic upside indicates his best football is to come. Praised by coaches for maturity and leadership on and off the field.

Cushenberry is not the typical bruiser at center. Doesn’t play to his frame. Allows his pads to rise as he snaps the ball and can get knocked back onto his heels, sometimes deep into the pocket. Will drop his hands to load up his punch, giving defenders an opportunity to get in the first jab. Snaps lack juice, floating back to the quarterback and providing defenders a split-second more time to attack before the play can really begin.

Chase Roullier, Washington Redskins — Cushenberry is further along in his development than Roullier was when Washington nabbed him in the sixth round of the 2017 draft out of Wyoming. With two seasons of starting action under his belt and needing to add strength, Cushenberry is more of a project than his bio suggests but brings serious upside.