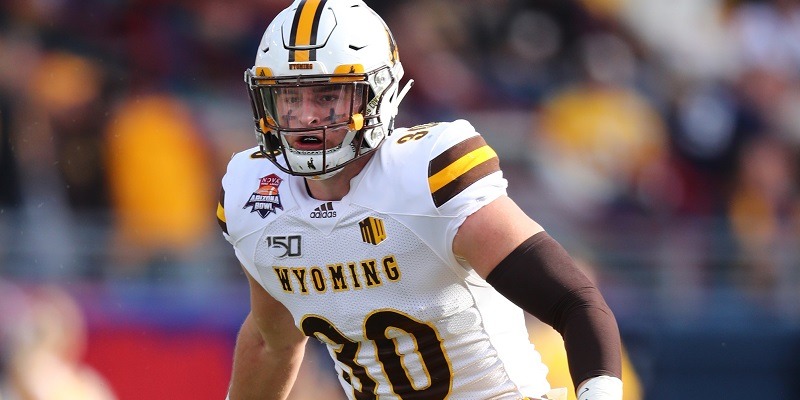 A two-time tackles leader for the Cowboys, Wilson participated in the Senior Bowl in January and looked the part. A high school defensive back, Wilson grew into his frame and was a four-year starter and three-time captain at Wyoming. He’s a solid athlete and three-down ‘backer who played well in coverage. Wilson had 402 tackles and recorded 10 interceptions and 14 pass breakups in his college career.

Wilson held his own at the Senior Bowl, particularly in coverage, and then had a quality workout at the NFL Scouting Combine, finishing better than average in most drills.

Wilson has a classic frame, with broad shoulders and a compact, muscled up build with excellent weight distribution. Four-year starter with elite skills to see it and smash it, typically running toward the ball off the snap. Trusts his eyes; doesn’t take the bait often on play-action, screens or misdirection. Quality athlete, was a WR-DB in high school. Very good initial movement in all directions, opening intriguing options as a blitzer or in coverage. Eager to attack the line of scrimmage in run support and defeats blocks consistently with long arms and accurate, heavy hands. Balance and overall athleticism show up in coverage. Reliable face-up tackler. High-effort player who takes smart angles. Has 49 career starts.

Wilson is more of a technician than a terrorizer as a tackler for an inside ‘backer, only flashing true physicality. Not the thumper his frame and production (402 career tackles) suggest, tackling efficiently but showing just average stopping power for an NFL linebacker. Forced five fumbles at Wyoming but just one over the past two seasons. Generally plays on the balls of his feet but doesn’t always break down well. Falls back on his heels and misses “easy” tackles in close quarters (San Diego State).

Joe Schobert, Jacksonville Jaguars — Schobert was a tackling machine at Wisconsin, but skeptics wondered if average speed would limit his effectiveness in the NFL. The 2016 fourth-round pick has used his instincts, functional athleticism and reliable wraps to become one of the most productive tacklers in the NFL.