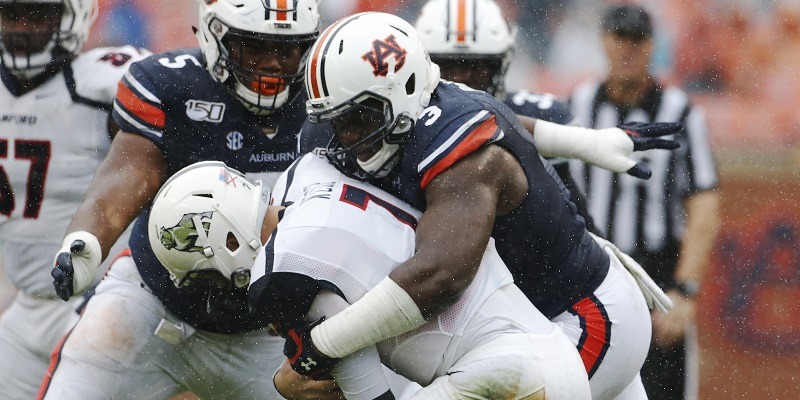 A four-year starter, Davidson was the first true freshman defensive lineman to start his initial game at Auburn in 30 years. A team captain as a senior, he earned first-team All-SEC honors in 2019 and finished with 175 career tackles (29.5 for loss) and 17 sacks.

Davidson was solid in one practice at the Senior Bowl before hurting his ankle. He was healthy enough to participate at the NFL Scouting Combine, though his only drills — 40-yard dash (5.04 seconds) and bench press (21 reps) — were underwhelming.

Compact and powerful, Davidson brings a varied skill-set and the versatility to line up all over the defensive line, including as a stand-up rusher. Good quickness and core strength to consistently play on the other side of the line of scrimmage, bulldozing would-be blockers deep into the pocket. Wins the leverage battle through knee bend and by firing off the ball low and hard, using a powerful bull rush to out-physical blockers. Though not truly light on his feet, Davidson is a better athlete than his thick frame suggests and possesses loose hips to change directions smoothly, generating respectable pursuit speed. Keen awareness of passing lanes, with good hand-eye coordination and timing to knock down passes (nine) and kicks (three, all in 2018).

Davidson lacks the quick-twitch explosiveness and bend to beat NFL offensive tackles around the corner with his hand in the ground. Often used as a stand-up edge rusher but shows just limited burst in this role as well. He spends too much time reading the ball carrier and then ripping himself free from blocks (rather than the other way around) for a player with his experience (51 starts), showing just average anticipation. Also has a pretty limited pass-rush repertoire, relying mostly on bull rushes, a rip and occasional push-pull moves.

Allen Bailey, Atlanta Falcons — Just as the 6-3, 288-pound Bailey did out of Miami in 2011, Davidson has generated buzz with his position versatility and highly physical play. Every team in the league will appreciate his gritty style, likely assuring a long career, although not necessarily one with eye-popping stats, like Bailey, who has collected 20.5 sacks in nine NFL seasons.