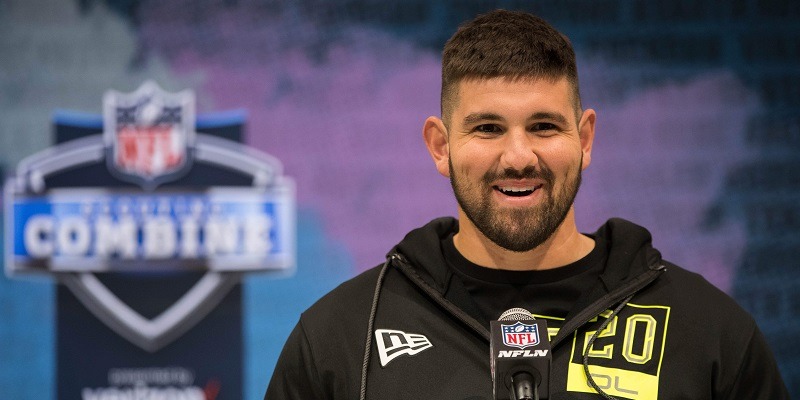 Hennessy was named to the Rimington Award watch list as a redshirt junior and rarely allowed pressure despite captaining an inexperienced offensive line. He was awarded practice jersey No. 3, an honor as Temple outfits its toughest players with single-digit practice jerseys. Graduated and opted to enter NFL draft early.

Hennessy impressed at the Senior Bowl when playing center but looked out of sorts in periodic work at guard. His workout at the NFL Scouting Combine was solid, with his quickness (4.60 in the short shuttle) standing out.

Hennessy has light feet for an interior offensive lineman, especially one with a prototypical broad-shouldered, square frame. Outstanding snap-to-step quickness. Fires his hands into the chest plates of opponents seemingly before his quarterback has even accepted the ball. Plays on the balls of his feet and with his knees bent, easily sliding laterally to mirror. Can make difficult reach blocks, and traps look easy due to his quickness. Grows roots when anchoring, sprawling his legs out and planting them in the turf while also showing good core flexibility and strength to hold up to bull rushers. Flashes some nastiness, looking to help teammates and knock defenders to the turf for pancakes when he’s not occupied. Big brother, Thomas Hennessy, is currently the New York Jets’ long snapper.

Hennessy has good but not outstanding size. Relies on his quickness and technique in the running game, lacking the raw torque to simply drive defenders off the ball consistently. Can get a little lazy and lean into defenders, leaving himself vulnerable to swim moves over the top if he stops chopping his feet. Needs to have his flight plan sorted out when blocking at the second level, too often losing track of his assignment and failing to relocate him in time. Warrants a close look during medical evaluations due to concussion.

Jason Kelce, Philadelphia Eagles — Football fans in the greater Philadelphia area have been treated to some extraordinary center play in recent years. Like the Eagles’ pivot, the Owls’ Hennessy is a terrific athlete for his position, and we would not be surprised to see a future Pro Bowl nod or two.