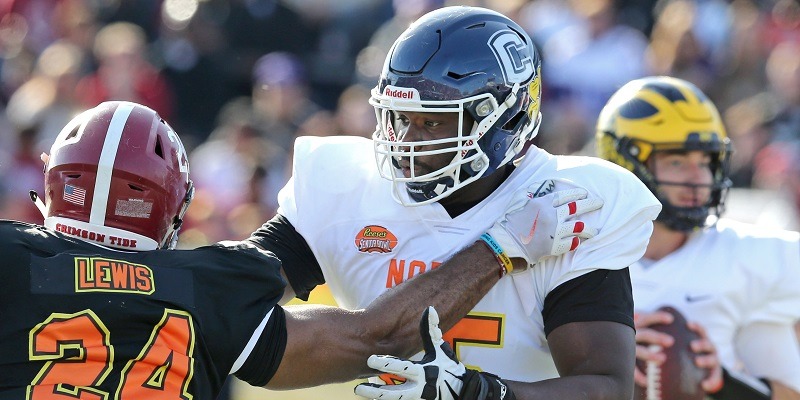 Originally from Kingston, Jamaica — he moved to New York and went to high school in Massachusetts — Peart started all 48 games for UConn in the past four seasons after redshirting during his first year on campus.

He impressed physically at the Senior Bowl, with a wingspan measuring 86 1/8 inches, then put up a very strong all-around workout at the NFL Scouting Combine.

Peart is certainly deserving of the “dancing bear” adage that gets tossed around in scouting circles. Incredibly light on his feet for such a big man, and possesses some great agility. Transitions easily when moving to the second level and hunting down linebackers. Length (36 5/8-inch arms) is phenomenal and should allow him to control distance against most opponents. Comfortably passes the eye test thanks to elite tools. Frame has room to put on more weight if needed. Became more disciplined with his footwork as a senior.

Peart is raw from a technical standpoint and will need to clean up his pass sets as a pro. Borderline pacifist at times in the run game, and does not demonstrate a finishing mindset to his blocks. Hands aren’t strong, which prevents him from redirecting defenders in the run game. Long arms make it difficult to win in a phone booth. Anchor can get knocked loose by good bull rushes. Mostly a right tackle in college who may take time to transition to the left side.

Brian O’Neill, Minnesota — Peart may not possess the same straight-line speed that O’Neill did coming out of Pittsburgh, but he’s just as athletic in pass protection. He’s the prototype that teams are looking for toward the back of Day 2. He’s a long and mobile player with a sky-high ceiling, but development is needed.