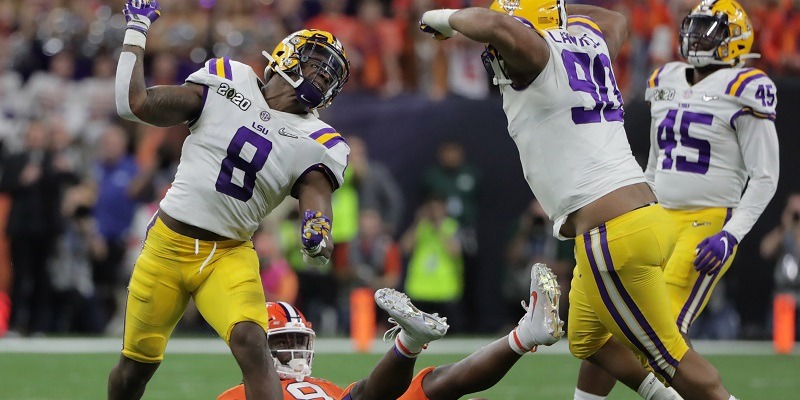 Compared to fellow Tigers linebacker Jacob Phillips, Queen was a late bloomer, but he has risen quickly. Queen started four of 13 games as a sophomore in 2018, notching 40 tackles (five for loss) and a sack, then took over as a starter following the departure of Devin White. Queen finished a breakout 2019 season with 85 tackles (12 for loss), three sacks, an interception and three passes defensed. He had eight tackles (2.5 for loss) and a half sack en route to winning defensive MVP honors in the national championship victory over Clemson.

Queen showed off his speed at the NFL Scouting Combine by running the fourth-fastest 40-yard dash (4.50 seconds) among linebackers, part of a very strong overall workout.

A physical prototype for the position, Queen is light on his feet and moves fluidly in every direction, showing first-step quickness and sharp suddenness when changing direction. Mobility translates to great range in coverage with instincts to match. Quality awareness and a feel for route combinations in zone, but not often tested in man-to-man. Reads the run well, triggering quickly to shoot gaps or slip blocks and get to the ball carrier. High-effort player who shows good range and pop as a tackler and can also threaten as a blitzer. Comes out of a program that has developed a number of quality linebackers.

Queen requires significant projection because he’s only a one-year starter. Many expected him to return for another season despite an impressive, albeit small, sample size. Not built to bang in the run game, meaning teams must be comfortable with him slipping blocks more than taking them on. Inconsistent shedding blockers when they can get up to him quickly, and he might need a quality defensive line to be effective. While very quick and fluid, Queen’s top speed isn’t elite, and he must prove his movement skills can translate to man-to-man coverage.

Jerome Baker, Miami Dolphins — Baker (Ohio State) had a slightly lengthier resume but shared similarities with Queen, as slightly undersized prospects with excellent all-around movement traits and the ability to defend the run, blitz or cover. Queen should also be a capable three-down player early in his career.