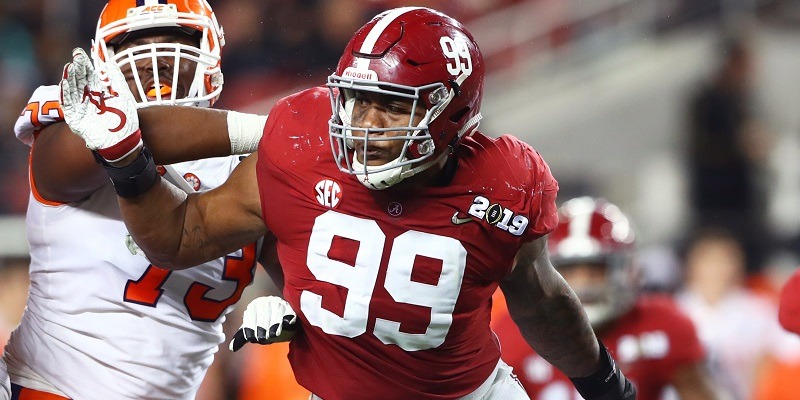 Davis’ career production didn’t trend in a positive direction after he posted 69 tackles (10 for loss) and 8.5 sacks as a sophomore. He had declining totals in all three areas in 2018 and 2019, although there’s much more to a defensive tackle’s value than numbers. He did earn second-team All-SEC honors in each of the past two seasons for an elite program.

Davis pulled out of the Senior Bowl due to an ankle injury but was healthy in time for the NFL Scouting Combine, where he had a solid, if unspectacular, workout.

Davis is among the most physically imposing players in the country. Blessed with a rare height, broad shoulders and muscular vines for arms that he uses with great effectiveness to corral opponents. He shows impressive initial quickness off the snap, challenging tackles’ outside shoulder when operating on the edge. When playing inside, his agility can surprise would-be blockers, and he shows impressive strength and an effective push-pull technique to rip himself free, clouding the vision of quarterbacks. Despite his height, Davis’ raw power and length make him an effective two-gapper. His frame and rugged game make him position- and scheme-diverse.

Davis lacks the sustained speed or flexibility to dip around the edge and close on quarterbacks as a traditional edge rusher, and he’s better off on the interior. He is a bit straight-line in his movements, like a lot of defensive linemen of his size, and has to gear down to change directions. Despite being frequently rotated on Alabama’s deep defensive line, Davis shows inconsistent effort to the flanks in pursuit. Comes with character red flags, most notably the background behind Davis suffering a gunshot wound to his leg in the early morning hours of August 27, 2017, outside of a Tuscaloosa bar. He reportedly was uncooperative with police following the incident, and the bar owner publicly suggested that Davis accidentally shot himself.

Henry Anderson, New York Jets — Despite registering 8.5 sacks in a breakout sophomore (2017) season, Davis is not a true pass-rush threat, lacking the quick-twitch explosiveness to beat NFL blockers with speed and instead relying on his length, strength and determination to earn “coverage” sacks. He is more of a jack of all trades than a dominator at any one position, projecting best as a traditional 5-tech defensive end in a three-man base, a la Anderson.