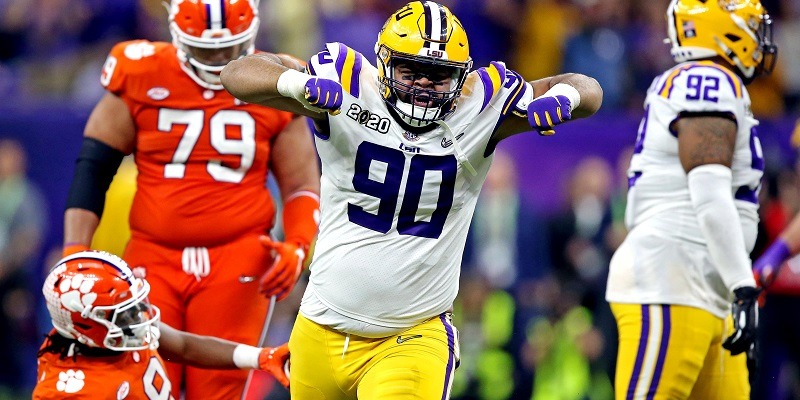 A five-star prospect out of Louisiana in the 2016 class, Lawrence was a senior leader on LSU’s national championship team. He earned second-team All-SEC honors from league coaches in 2019, finishing his career with 120 tackles (21 for loss) and nine sacks, with seven pass break-ups. He’s the nephew of former LSU standout linebacker Oliver Lawrence, a key contributor to the Tigers’ 1986 and 1988 SEC championship teams.

Lawrence did not overly stand out at the NFL Scouting Combine, with his 3-cone drill (8.03 seconds) the fourth-slowest among D-linemen.

A high-energy tough guy, Lawrence utilizes his naturally low center of gravity and core strength to collapse rushing lanes from the interior. Flashes an explosive initial burst to split gaps and locates the football quickly, re-directing his charge and pursuing to the flanks and downfield with passion. Good strength at the point of attack, showing the ability to rip ball-carriers to the ground while fighting off blockers. Despite possessing below-average height for the position, Lawrence plays tall and gets his hands in passing lanes. Earns high grades for his character, on and off the field. Named a “permanent” team captain as a true sophomore and maintained a 3.0 GPA throughout his time at LSU.

Lawrence flashes quickness and power but does not consistently move the meter in either regard. Too easily rooted out by double-teams, simply lacking the girth and sand in his pants to hold his ground as a run-stuffer. With limited athleticism, he might struggle to be much of a pass rusher against better opposition, and his production dipped in 2019.

Akeem Spence, free agent — Like the 6-1, 305-pound Spence, Lawrence will have to make it in the NFL based on tenacity and hustle. He will certainly get his opportunity, but the tape does not live up to his reputation as a difference-maker for the Tigers.