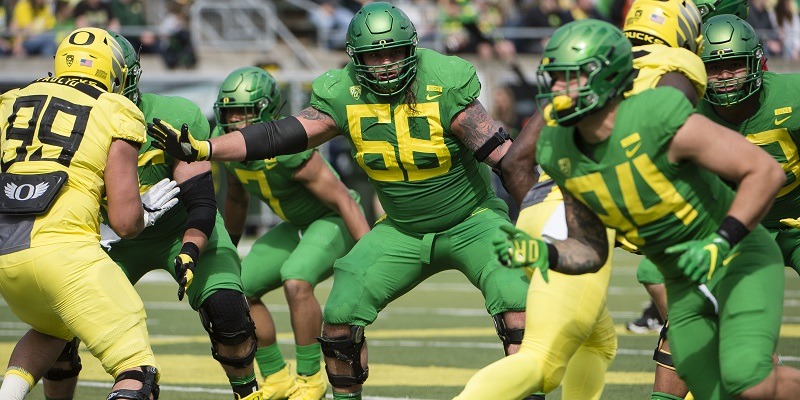 A four-year starter, Lemieux graded out among the top guards in the country as a junior and senior. He  redshirted in 2015 before taking over as the starter at left guard, which was his home for the next four years in Eugene. High marks for pass-blocking included No. 1 in Pac-12 as a junior.

Lemieux pulled out of the Senior Bowl after initially accepting an invitation, then had a mixed bag at the NFL Scouting Combine, where he ran well (5.11-second 40-yard dash) but struggled in the jumps.

Lemieux has a classic offensive guard frame, square with broad shoulders, wide hips and thick limbs. Good initial quickness and overall athleticism, using lateral agility and balance to handle active rushers in pass protection. Agility and experience show on combo blocks. Gets a powerful initial shove on defensive tackles before climbing to the second level. Shows good awareness and mobility in space, adjusting to moving targets. Technically sound. Highly competitive. Plays with some nastiness and pounces to pancake opponents if they get off-balance. Alpha dog on senior-laden line.

Lemieux is not the physically dominant destroyer his blocky frame and reputation indicate. Does not latch onto opponents and erase them from the play. Is more of a shove and shuffle blocker when attempting to mirror. Effective jabs, but needs more power behind his punch.  Average grip strength to latch on and sustain.

Joe Thuney, New England Patriots — Thuney emerged as a quality starter at left guard for New England after being selected 78th overall back in 2016. While not a dominator, his quickness, technique and tenacity make him highly effective, a good model for Lemieux.