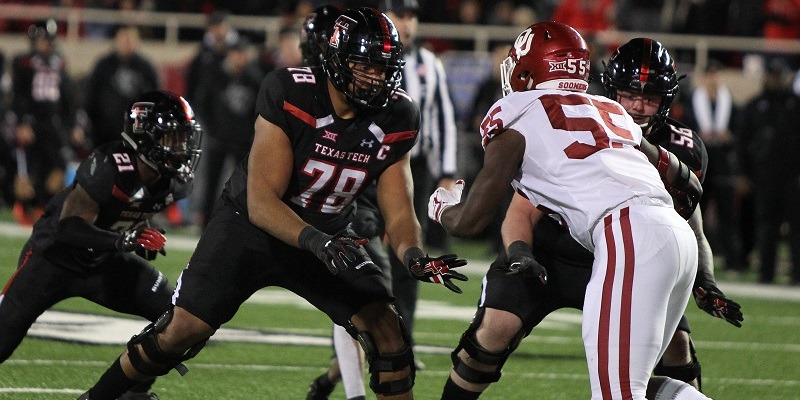 Steele redshirted before emerging as the Red Raiders’ starting left tackle in 2016. He went on to start 37 consecutive games at right tackle but was largely ignored when it came to postseason accolades, topping out with honorable mention All-Big-12 honors last season.

He was a standout, though, at the Senior Bowl and the NFL Scouting Combine, where he blazed the fifth-fastest 40-yard dash (5.03) of all offensive linemen.

Steele looks the part, with an 85 1/8-inch wingspan and 35 5/8-inch arms, each of which ranked among the biggest of all the players at the Senior Bowl. Shows impressive agility to keep his massive frame square to defenders and is so long and strong that he can simply latch on and control them. He plays with a nasty edge (despite Tech’s reputation for producing finesse blockers), and his athleticism stands out when he races 15 to 20 yards downfield to take out not only linebackers but defensive backs.

Steele’s tendency of bending at the waist can sap his otherwise impressive strength, and this issue is exacerbated by a tendency of ducking his head on contact, leaving the tall tackle surprisingly vulnerable to swim moves over his head. He played out of the two-point stance for the Red Raiders and could struggle if asked to convert to lining up with his hand in the dirt in NFL.

Chris Clark, Houston Texans — Steele isn’t the most flexible athlete and therefore isn’t a fit for everyone. His rare combination of length, athleticism and aggression, however, could make him effective in shotgun-heavy passing attacks. Like the similarly-built and athletic Clark — a 10-year NFL veteran — Steele is better than his relative lack of hype suggests, valued more by scouts than the media.