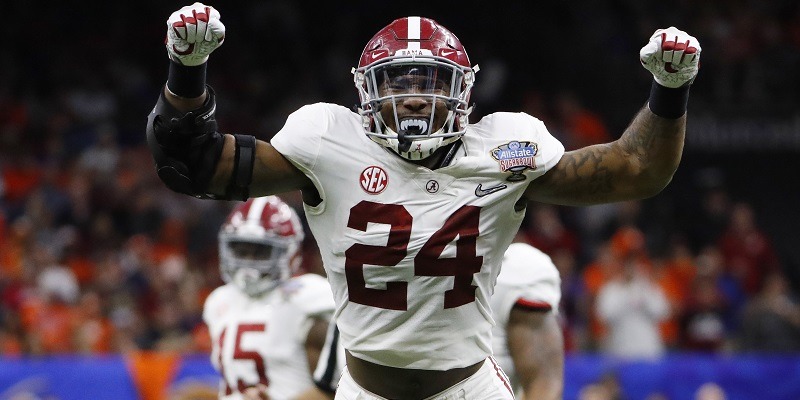 Injuries are an underlying theme in Lewis’ projection to the NFL. He missed 10 games as a sophomore in 2017 (arm) and all of 2018 (knee). Those ailments were sandwiched between two seasons with flashes — sometimes prolonged — of potential greatness. As a freshman in 2016, he had a sack in 11 games as a reserve. In 2019, Lewis was second-team All-SEC (coaches) and was ninth in the conference with 6.0 sacks. He also posted 11.5 tackles for loss and led the team with 16 QB pressures.

Lewis was up and down at the Senior Bowl, but his physical talent was obvious at the NFL Scouting Combine. While he didn’t run the 40-yard dash, he jumped 37 inches in the vertical and 124 inches in the broad at 6-foot-5, 262 pounds.

Lewis is a prototype of the modern day outside linebacker, with a well-built, long-limbed frame, light feet and excellent overall weight distribution. Easy athleticism is apparent from the snap. Surprises with initial quickness to gain immediate advantage of opponents. Frequently the first off the snap, rushing the passer with an instant burst to cross the face of would-be blockers. Gobbles up ground with a long gait and impressive change of direction, projecting as a difference-making edge rusher. Wasn’t asked to run a lot of twists and stunts in this scheme but could excel in this role. Uses lower-half athleticism with long arms and strong hands to rip and keep himself free from blockers. Size and ease of movement also stand out when Lewis drops in coverage, where he shows balance, agility and easy acceleration to mirror pass-catchers. Freakish athleticism and size combination — best football might be ahead of him.

Lewis represents a classic case of a player looking like Tarzan and playing like Jane. Doesn’t play up to his natural talent, appearing to throttle down far too often, especially when he sees the ball is going away from him. Too much standing around the pile and letting teammates do the dirty work. High-cut body type, showing some lateral stiffness. Comes with serious medical concerns after missing all but four games of the 2017 season after tearing a ligament in his elbow and all of the 2018 season with a torn ACL. Opted not to participate in the final college game of his Alabama career, sitting out the 2019 Citrus Bowl to focus on preparing for the draft.

Tyus Bowser, Baltimore Ravens — Upside is the key word when describing Bowser and Lewis. They flashed rare traits in college, earning early draft consideration despite less-than-dominant production and durability concerns. Just as the 6-3, 245-pound Bowser (selected 47th overall) did in 2017, expect Lewis to get top-50 attention.