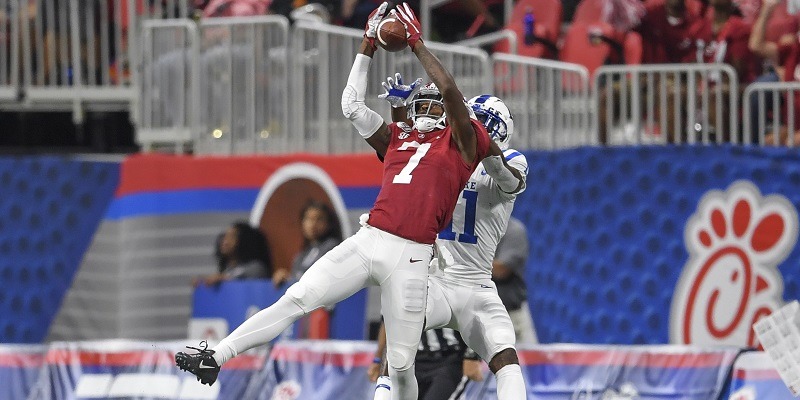 Considered one of Alabama’s top overall athletes, Diggs made the full-time transition to cornerback only in 2018 after previously playing receiver, kick and punt returner and defensive back. He had four interceptions, 18 passes defensed in 18 games over the past two seasons, while also returning a fumble for a touchdown.

Diggs impressed in the positional drills at the NFL Scouting Combine, but he declined to take part in any of the testing.

Diggs looks the part of a modern press corner. Surprisingly fluid for a corner of his height, showing the loose hips to turn and run with receivers downfield as well as good balance and burst out of his breaks. Alternates his approach in press, able to punch or harass receivers at the snap to disrupt timing, or just turning and running with them. Generally reliable tackler whose long arms aid him greatly in tripping up ball carriers seemingly out of his grasp. Became a more physical defender in 2019. Still an ascending talent whose best football should be ahead of him.

Diggs has focused on the cornerback position only for a season and a half, and his inexperience shows at times. Has improving route recognition but is more reliant on his size and athleticism to choke throwing lanes than anticipating and making more plays on the ball. Focuses too much at times on receivers adjusting to the ball, rather than turning toward the action. After winning the starting role at corner to begin his junior campaign, Diggs missed the final nine games of the 2018 season with a broken foot, which will require a closer look by NFL doctors.

Aqib Talib, free agent — Diggs and Talib share a similar body type and movement skills, as long, lanky cornerbacks who like to play physical but have the speed to hang deep. Like Talib, Diggs would fit best as a perimeter corner who gets to mix in plenty of zone, with a Cover-3 scheme being perhaps a perfect match.