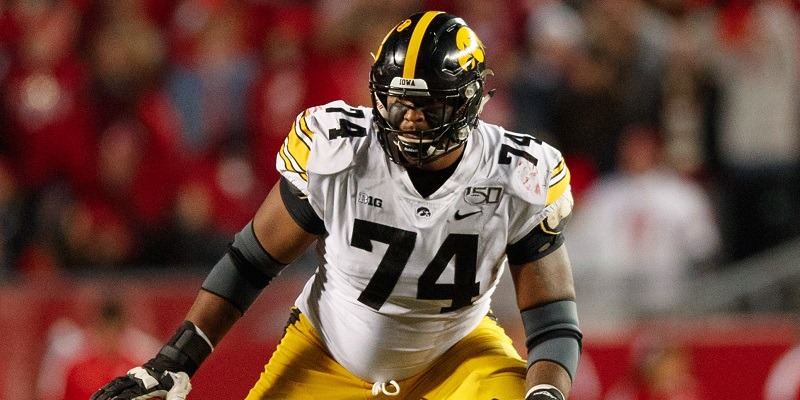 A homegrown product, Wirfs signed with Iowa as a highly touted prep, becoming the first offensive lineman to start as a true freshman in the Kirk Ferentz era and seeing time at right and left tackle. He earned All-American accolades in 2019 and won the Big Ten’s Rimington-Pace Award as the league’s top offensive lineman. He started 33 games at Iowa, including 10 at right tackle and three at left tackle last season.

Wirfs blew evaluators away with his athleticism at the NFL Scouting Combine, putting up one of the best workouts by an offensive lineman in recent memory. Not only was his 40-yard dash (4.85) the fastest among O-linemen, but his vertical (36 1/2 inches) and broad (121 inches) jumps set records.

Among the most imposing prospects in the draft, Wirfs’ weight is well distributed throughout and features a strong lower half, helping him generate explosive power. Surprisingly nimble for a man of his dimensions, sliding smoothly to his right to maintain the arc against speed rushers and possessing the lateral agility to shuffle and mirror against counters inside. Wirfs’ initial quickness is also evident in the running game, as he is consistently able to complete down blocks on defensive tackles, often erasing them from the play and switching to search for secondary targets. One of Wirfs’ most impressive attributes is the pro-readiness he shows on combo blocks, recognizing twists, stunts and late blitzes to switch off with teammates. Plays with the nastiness that will endear him to offensive line coaches, knocking opponents to the turf and landing on them for massive pancakes. One of the more physically impressive prospects to come out of Iowa during Ferentz’s (an OL guru) long tenure.

The biggest concern is Wirfs’ core stiffness. While capable of shuffling laterally to mirror, he struggles when rushers cross his face, lacking the flexibility to turn his massive frame and recover. He oversets a bit too often, allowing rushers inside. When run blocking, he is sometimes unable to adjust to the moving targets in the second level. To counter this, Wirfs needs to show a sharper flight plan, anticipating where defenders are headed and beating them to the punch. Can be walked deep into the pocket when he loses the leverage battle, although he generally recovers by sinking his hips late to anchor. Wirfs appears to play on his heels at times, almost inviting bull rushers because he is so confident in his own strength.

Bobby Massie, Chicago Bears — Wirfs has the look of a Day 1 starting right tackle or guard (if that is his NFL team’s preference) with many of his flaws correctable. His size and mauling style are reminiscent of Massie, who has started 102 games over the past eight seasons in Chicago and Arizona, though his testing numbers will cause some to try him at left tackle.