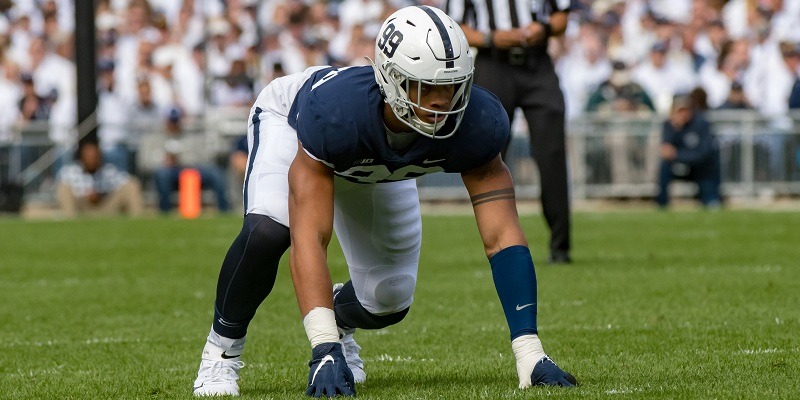 Gross-Matos was forced to show great resiliency early in life with his biological father (drowning) and brother (struck by lightning) dying tragically in separate incidents before he was 11 years old. After ascending to the starting lineup, he had super production the past two seasons, with 35 tackles for loss and 17.5 sacks.

Gross-Matos did not run the 40-yard dash at the NFL Scouting Combine, but he finished top-six among D-linemen in the vertical (34 inches) and broad (120 inches) jumps.

Gross-Matos is a twitchy edge rusher with the length, burst and bend that every NFL team covets. While currently a bit slimmer than scouts would prefer, he could add at least 10 pounds of muscle onto his lanky frame. He shows impressive initial burst off the snap, instantly challenging the corner and forcing tackles on their heels, where his best asset — a menagerie of effective counters inside — can make him a one-man wrecking crew. Excellent coordination between his upper and lower half to slap away the reach of would-be blockers while contorting his frame to get skinny and slice through the gap. Occasionally asked to rush (and drop) out of the two-point stance, showing enough balance and agility to handle this role at the next level. Plays like his hair is on fire, showing terrific effort laterally and downfield in pursuit, including in stalking backs in pursuit down the line of scrimmage for splashy tackles for loss. Huge wingspan gives him a massive tackle radius.

Still growing into his frame, Gross-Matos will need to add strength and mass in his lower half to hold up as a full-time defensive end against the run. Too reliant on his quickness to elude blockers in the running game and can get washed out when targeted and blockers get into his chest. Shows impressive effort in spinning off blocks and pursuing downfield but surrenders valuable yardage in doing so.

DeMarcus Lawrence, Dallas Cowboys — Though he offers the juice off the edge to make an immediate impact as a speed rusher, the team that uses an early pick on Yetur-Matos is banking on his upside, as he is not yet a finished product. The tools and work ethic are there, however, to warrant top-50 consideration. He could become a Pro Bowl-caliber, full-service defensive end with time to get stronger and further hone his hand play.