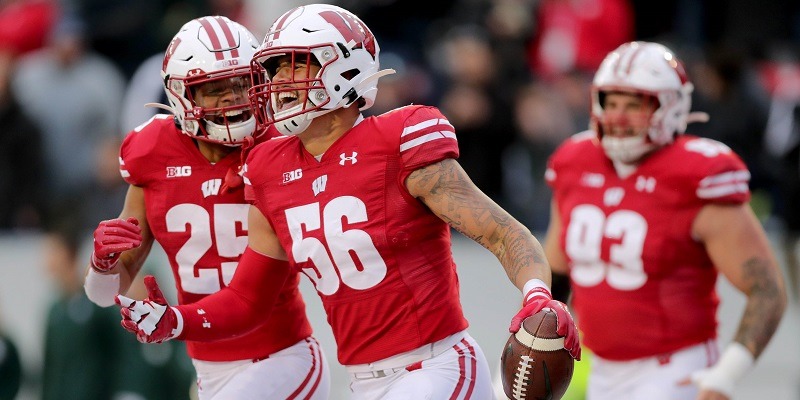 Baun worked on the edge and off the ball at the Senior Bowl, impressing as a pass rusher but having up-and-down stretches in coverage. Despite struggling in the jumps at the NFL Scouting Combine, he ran a decent 40-yard dash (4.65 seconds) and showed great agility in the 3-cone drill (7.00).

Baun has a compact, country-strong frame with good weight distribution. Talented pass rusher, capable of beating tackles with his speed, surprising power and a varied arsenal of moves, including a spin, dip and rip, push/pull and plenty of dekes and counters. Plays faster than he shows on the stopwatch. Impressive timing off the snap count to beat tackles off the ball. Shows some bend around the edge, cornering smoothly and flattening efficiently to close on the ball. Good lateral agility on his dekes and to avoid blockers in space, coordinating his upper and lower halves nicely. Physical tackler who brings his hips to eliminate yardage gained after contact. Stronger than he looks, incorporating good knee bend and pad level to win the leverage battle. Team captain in 2019.

Baun is a bit undersized to remain in the rush role in which he starred as a senior for the Badgers, lacking both ideal height (6-2) and limb length (32 3/4-inch arms) to keep NFL blockers at bay. Lack of length shows up most in space, when ball carriers are able to skirt past his limited strike zone run through his grasp. Just average balance when breaking down to face up ball carriers. Plays with blinders on, locking into his target only to be beaten by misdirection, screens, etc. Has a long history of injuries, including a torn meniscus (2016) and Lisfranc (2017), each of which required surgeries.

Kamalei Correa, Tennessee Titans — Baun was one of the breakout stars in college football in 2019, jumping from 2.5 sacks to 12.5 as a senior edge rusher. Correa played a similar role at Boise State prior to the Ravens selecting him 42nd overall in 2016. Baun will have to prove that he can handle a more diverse role to succeed in the NFL, but the traits and grit are there, and it wouldn’t be a shock if he went in Round 1.