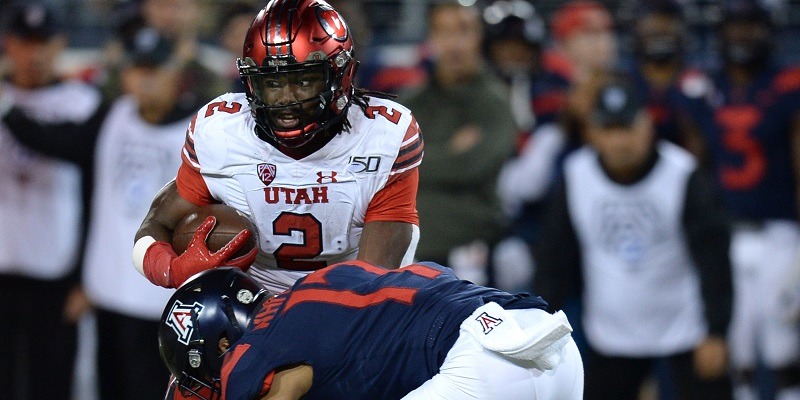 Moss, a cousin to former NFL wide receivers Santana and Sinorice Moss, carried 712 times in college, becoming the first player in school history with three consecutive 1,000-yard seasons and setting numerous records, including career rushing yards (4,067) and rushing touchdowns (38). He was the 2019 Pac-12 Offensive Player of the Year.

Moss passed on the Senior Bowl to prepare for the NFL Scouting Combine, with shaky results. He wasn’t expected to run fast, but tied for the fourth-slowest 40-yard dash (4.65 seconds) at the position and was fourth-slowest in the 20-yard shuttle (4.37).

Compactly built with quick feet, Moss boasts an ideal frame, agility and balance. He has some “human joystick” qualities to him, darting laterally, forward and backward to elude defenders in tight spaces, but is not reliant on making them miss, showing good lean, leg drive and toughness to shed tackles. Good stop-start quickness, utilizing hesitation moves, a solid stiff-arm and good vision to set up blocks and consistently and creatively generate yards after contact. Not often featured in the passing game but shows reliable hands, with plenty of experience being flexed out at receiver. Alert and competitive in pass protection.

While tough to bring down, Moss is not the bulldozer his frame suggests, winning more often with his athleticism than power. He varies his speed nicely, playing fast, but he lacks the stopwatch speed to wow in workouts. Featured in a run-heavy scheme with a tradition of producing NFL-caliber blockers, helping pave the way for his success. Had a tendency to get nicked up. Missed the final five games of the 2018 season with a knee injury that ultimately required surgery and deserves a closer look by NFL doctors.

Derrius Guice, Washington — Finding a perfect comparison for Moss is difficult due to his rare combination of a stubby frame, balance through contact and preference for making defenders miss rather than bulldozing through them, as his frame suggests he could. Although Guice is more physical than Moss, he also has struggled with durability. Both have the natural ability to carry a big NFL load.