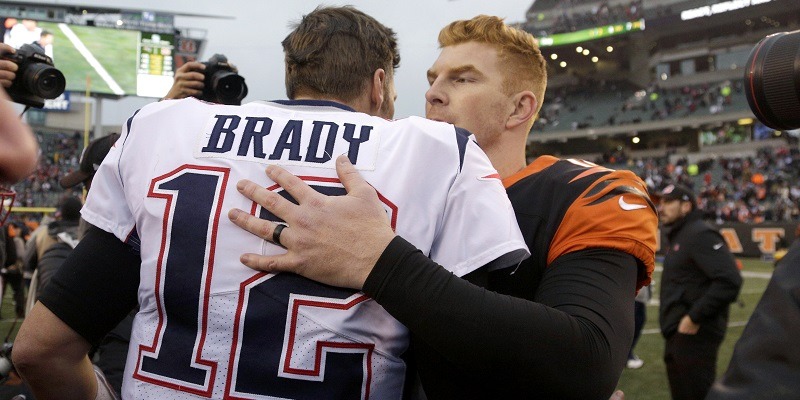 Andy Dalton leapfrogged Cam Newton on Thursday at some sportsbooks as the veteran quarterback favored to joined the quarterback competition in New England.

Shortly after being released by the Cincinnati Bengals, Dalton’s odds of starting for the Patriots in Week 1 of the 2020 season dropped from +900 at FanDuel on Monday to +200. He is also being offered at +300 by DraftKings.

Second-year quarterback Jarrett Stidham remains the favorite at -200 and -250 at the two sportsbooks, but Cam Newton dropped to +600 and +500. The former Carolina Panthers starter was listed at +170 at FanDuel on Monday, but he reportedly is not interested in signing for backup money — a la Jameis Winston’s deal with the New Orleans Saints.

PointsBet still lists the Patriots as Newton’s most likely destination at +180, with the Jacksonville Jaguars next at +200.

The Patriots also have veteran Brian Hoyer, who is listed at +900 by both books. The only other quarterback on the roster is Brian Lewerke, an undrafted rookie out of Michigan State who is listed at +3000 by FanDuel and +10000 by DraftKings, which also is offering +2500 odds on the Patriots re-acquiring Jacoby Brissett from Indianapolis and having him start Week 1.

FanDuel also lists the Patriots as Dalton’s most likely next destination at -135. He is being offered at +150 to join the Jacksonville Jaguars followed by the Pittsburgh Steelers (+650), Las Vegas Raiders (+3000) and the Washington Redskins (+3000).

The Patriots did not select a quarterback in last week’s draft despite Tom Brady signing with the Tampa Bay Buccaneers in free agency. Stidham and Hoyer are currently slated to compete for the job. Lewerke was signed after the draft and is considered a developmental prospect who will compete for a spot on the roster or practice squad.

Dalton was released on Thursday by the Bengals after nine seasons with the franchise.

The move was expected following a 2-14 finish in 2019 that brought the Bengals the No. 1 overall pick in the 2020 NFL Draft. Cincinnati drafted Dalton’s replacement, LSU quarterback Joe Burrow, with the No. 1 pick last week.

Dalton, 32, started at least 11 games every season with the team since he was drafted in the second round in 2011. He had 204 career touchdown passes and 31,594 passing yards.

Dalton requested his release after being shopped via trade.

After an 0-8 start last season, Dalton was replaced as Cincinnati’s starting quarterback in October 2019 by first-year coach Zac Taylor. He returned to the starting job when rookie Ryan Finley struggled.