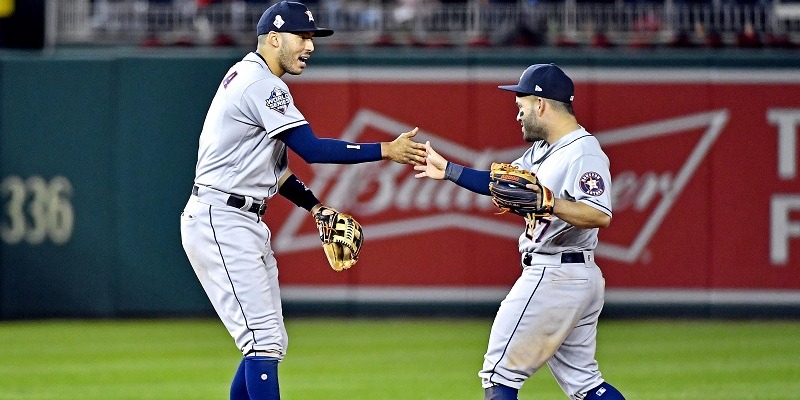 Yordan Alvarez, Carlos Correa and George Springer each hit two-run home runs as the visiting Houston Astros took advantage of a late Washington Nationals pitching change to move one win away from their second World Series title in three years, following a 7-1 victory in Game 5 on Sunday.

Houston once trailed the series 2-0, but has now won three straight. The Astros will host Game 6 on Tuesday night. Game 7, if necessary, would be Wednesday night in Houston.

An anticipated matchup of staff aces fizzled when the Nationals scratched Max Scherzer earlier Sunday because of neck and back spasms. Right-hander Joe Ross started instead for Washington, giving up two home runs in the first four innings.

Astros right-hander Gerrit Cole made his start as expected, rebounding from a loss in Game 1 to earn the victory. He gave up one run, on a Juan Soto home run, and three hits over seven innings, striking out nine and walking two..

After an off day Monday, the Astros will get their first chance to clinch the title Tuesday in Game 6 with Justin Verlander on the mound. The Nationals are expected to counter with Stephen Strasburg.

No team has won a home game in the series, the first time the visiting team won the first five games of the World Series since the 1996 matchup between the Atlanta Braves and New York Yankees (who went on to clinch at home in Game 6). It is just the third time it has happened in World Series history.

Alvarez was the first to get to Ross, hitting a line drive to center field on a 2-1 sinker in the second inning. It was the rookie’s first home run of the postseason and first extra-base hit since the American League Division Series.

Ross gave up his four runs on five hits over five innings with two walks and one strikeout. It was his second appearance of the World Series after pitching two scoreless innings of relief Friday in Game 3.

The Nationals had a prime scoring chance in the second inning against Cole with runners on first and third and nobody out, but Ryan Zimmerman struck out, and Victor Robles grounded into a double play.

Soto’s home run, coming in the seventh, was the second of the World Series for the Nationals rookie and fourth of the postseason.

The Astros added a run in the eighth inning on an RBI single from Yuli Gurriel.