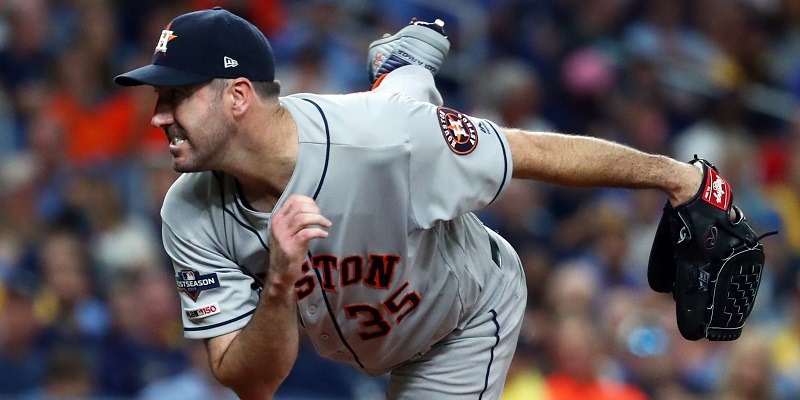 NEW YORK — Last season, the Houston Astros were unable to get back to the World Series because after winning the first game of the American League Championship Series, they lost the next four to the eventual champion Boston Red Sox.

This season, the Astros are on the verge of doing the reverse in the ALCS, and can clinch their second trip to the World Series in three seasons Friday night in Game 5 against the host New York Yankees.

Right-hander Justin Verlander will start for Houston and oppose Yankees left-hander James Paxton in a rematch of Sunday’s Game 2.

The Astros have scored 15 runs in the series but have hit six homers, including four in New York, where they went 0-3 in the 2017 ALCS before winning Games 6 and 7 at home. George Springer and Carlos Correa blasted three-run homers in Game 4 on Thursday, when Houston claimed an 8-3 win.

“When the game ends and we go into the next game, I love the fact that we have JV on our side,” Astros manager A.J. Hinch said of Verlander. “And he’s going to set a tone (Friday) that hopefully leads us to the World Series.”

The Yankees have scored six runs since opening the series with a 7-0 win. They went 0-for-7 with runners in scoring position, stranded 10 and committed four errors Thursday.

“We played poorly tonight, there’s no other way to explain it,” Yankees manager Aaron Boone said after the game Thursday. “And we need to flush this immediately because — we talked about it as a team, we need to get over this in a hurry and come put our best foot forward (Friday).”

During the series, the Yankees are 4-for-27 with runners in scoring position and have stranded 33 runners.

“What got us here was we’re able to put the ball in play, move guys over (and) score guys when they’re out there on the pond,” Yankees right fielder Aaron Judge said.

Verlander is 1-1 with a 3.12 ERA in three postseason starts this fall and took a no-decision in Game 2 on Sunday, when he allowed two runs on five hits in 6 2/3 innings.

“I think one through nine can hurt you with a homer,” Verlander said. “If you make mistakes, they punish you. It’s just kind of one of those lineups that you have to go out there and understand that it’s going to be a grind.”

Paxton will make his third postseason start and the Yankees are hoping he can provide some distance and look like the pitcher who was 15-6 with a 3.82 ERA in the regular-season and won his last 10 decisions.

Paxton was given a short leash in Game 2 when he allowed one run on four hits in 2 1/3 innings. Paxton threw 51 pitches to 12 hitters but fell behind nine of those hitters on the first pitch.

After his start, there was some speculation Paxton was tipping his pitches, something that also happened after he started in Houston in April.

“Not concerned about tipping,” Paxton said Thursday. “I made some mistakes and also they hit some good pitches.”

Paxton will be making his second postseason start in New York and will do so two weeks after opening the AL Division Series against the Minnesota Twins. In New York’s 10-4 win, he allowed three runs on five hits with eight strikeouts but needed 86 pitches to get through 4 2/3 innings and fell behind 12 of the 20 hitters he faced.

The Yankees have been without Giancarlo Stanton for the last three games due to a strained right quadriceps and it is possible he could play Friday.