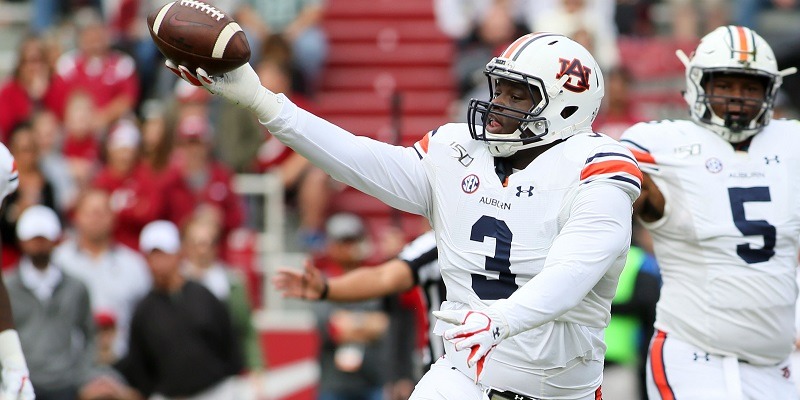 LSU has the SEC’s top passing offense — the primary reason the Tigers are ranked No. 2 in the country.

“This is the best offensive line that we’re going to play so far this year,” LSU coach Ed Orgeron said of the Auburn group that has led the way for the SEC’s top rushing offense (239.6 yards per game).

Moments later, Orgeron turned his attention to the other side of the ball, saying Auburn “has the best defensive line we have seen so far.”

Even though LSU is the second-highest-scoring team in the country (50.1 points per game) and has an average victory margin of 30.1 points, it has had its ups and downs with both lines, though both units seem to be coming around.

The offensive line played its best game two weeks ago when LSU rushed for 219 yards in a 42-28 victory over then-No. 7 Florida. It has also protected Joe Burrow well enough for him to lead the second-ranked passing offense in the country.

“We’re going to have to play great on the offensive line this week,” Orgeron said.

Auburn averages 2.86 sacks per game, second in the SEC to only Florida, which had none against LSU. The front is led by Marlon Davidson and Derrick Brown.

“They’re (dominant) week in and week out,” Auburn coach Gus Malzahn said. “Both of them are dynamic impact players, and they’re both playing at a very high level right now. They have the ability to change any game.”

So does Burrow, who has become one of the most productive players in all of college football.

AHe’s completing 79.4 percent of his passes for 2,484 yards, and his 29 touchdown passes are already the most in a season for any LSU quarterback.

“You look at LSU offensively and it looks like a video game when you watch it on the film,” Malzahn said.

s for LSU’s defensive line, it’s as healthy as it has been all season, getting several starters back from injury.

“We finally have a defensive line that we feel like we can rotate,” Orgeron said.

Auburn slipped in the SEC race with a 24-13 loss at Florida the week before the Gators fell to LSU. But Auburn bounced back last week with a 51-10 victory against Arkansas.

Auburn freshman quarterback Bo Nix is coming off a three-touchdown-pass performance in which he also ran for a score. LSU running back Clyde Edwards-Helaire is second in the SEC with seven rushing touchdowns.