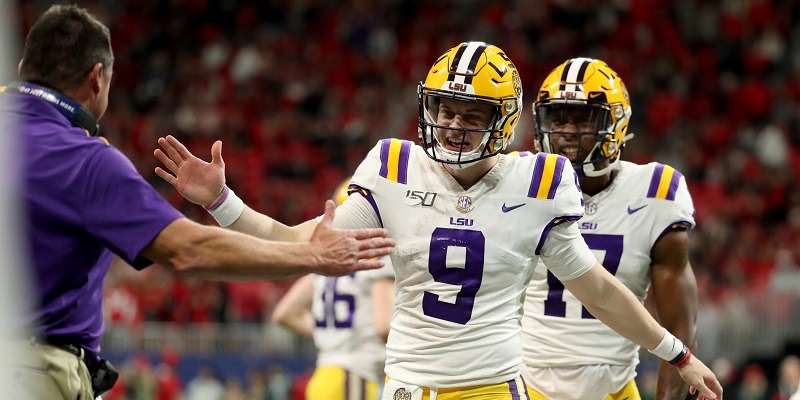 The Cincinnati Bengals selected LSU quarterback Joe Burrow with the first overall pick in the 2020 NFL Draft on Thursday night.

Commissioner Roger Goodell made the announcement from the basement of his home to kick off the virtual NFL draft, with Burrow watching with his parents and the Bengals’ brass set up on remote workstations from their separate residences in Ohio.

According to ESPN’s Adam Schefter, Bengals owner Mike Brown officially welcomed Burrow to the team on Wednesday, sending a letter to the quarterback and Bengals No. 9 jerseys to his parents.

After earning his stripes and a national title at LSU, Burrow gets a chance to return to his Ohio roots and turn around a franchise that hasn’t won a playoff game in three decades.

Thursday night capped a four-month stretch in which Burrow captured the Heisman Trophy, the College Football Playoff national championship and became the first pick in the draft.

Cincinnati went 2-14 last season, and first-year coach Zac Taylor turned away from starting quarterback Andy Dalton during the nosedive. Dalton remains with the team but has been the subject of trade speculation.

Burrow set the FBS record with 60 touchdown passes as a senior. The former Ohio State star recruit transferred to Baton Rouge in 2018 and started the past two seasons. In 2018, Ohio State coach Urban Meyer went with Dwayne Haskins as the Buckeyes’ starting quarterback and Burrow, a former Ohio Mr. Football winner, left for a new opportunity.

The selection made it three straight NFL drafts that opened with the Heisman Trophy winner as the top pick. Baker Mayfield (Oklahoma) was the No. 1 pick in 2018 and another former Sooner, Kyler Murray, was the first player selected in 2019 by the Arizona Cardinals.

According to ESPN, the Bengals turned down multiple efforts by the Miami Dolphins to trade up for Burrow.