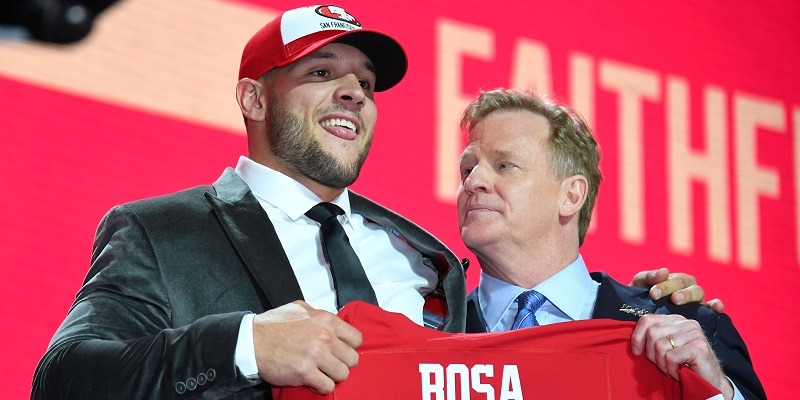 Ohio State held its Pro Day on Wednesday, and defensive end Nick Bosa was there just to talk.
Bosa, the potential No. 1 pick in next month’s NFL draft, did not participate with the rest of the Buckeyes’ pro hopefuls after performing well in drill work at the 2019 NFL Scouting Combine.
“I just trust the people who advise me. They told me it was unimportant,” Bosa told the NFL Network about Pro Day. “I’m here to meet all the teams that want to meet with me, and that’s what’s really important. I’m just doing what I’m told.”

He said he had meetings scheduled later Wednesday with the San Francisco 49ers, who hold the No. 2 pick, and the New York Giants, who pick sixth. He interviewed with all the top teams at the combine, including Arizona, which picks first.
Bosa said he will have further discussions with the Cardinals, who might otherwise be focusing on Oklahoma quarterback Kyler Murray. Either way, Bosa is expected to be in high demand at the top of the draft.
“I have a lot of visits coming up, so my next three weeks are super busy, flying all over the place, meeting with teams,” he said.
His message to those teams?
“Just how much I love the game and how much I want to continue to get better,” he said.
“Obviously, there is a lot of doubt with how long it has been since I played. But I have played this game my whole life and I have put on film the player that I am, and if the film isn’t good enough, I don’t know what else I could have done.”

His junior season ended early because of a bilateral core muscle injury. He had 29 tackles for loss, including 17.5 sacks, in 29 career games for the Buckeyes.
Bosa (6-foot-4, 266 pounds) put up 29 reps at 225 pounds on the bench press at the combine, had a 33.5-inch vertical and ran a 4.79 40-yard dash. All those numbers were better than what his brother, Joey, a Los Angeles Chargers defensive end, did at the combine before being selected No. 3 overall by the franchise in the 2016 draft.
He said when he’s not meeting with teams across the country, he’s training in Fort Lauderdale, Fla., with his brother. But he doesn’t brag about the combine results.
“I was not the happiest my with 40 anyway,” he said. “So there is no trash talk at all.”
Bosa told ESPN he would love to play with edge rusher Dee Ford, acquired by the San Francisco 49ers in a trade this month with the Kansas City Chiefs.
“He played a bunch with my brother,” Bosa said. “I’ve seen him a lot.”
–Field Level Media