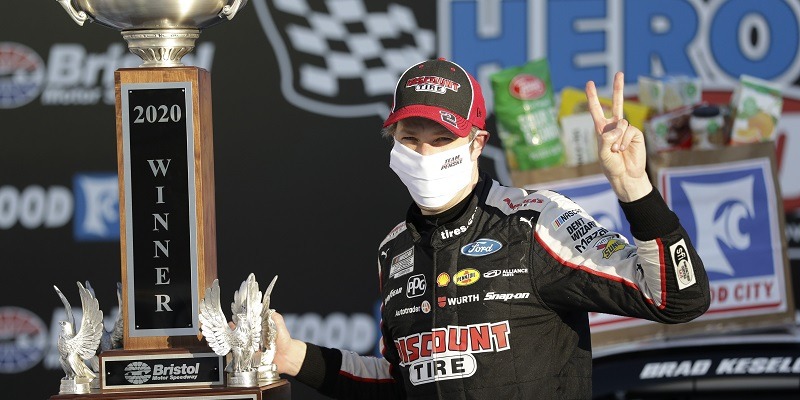 Brad Keselowski appeared headed for a third-place finish on Sunday at Bristol Motor Speedway but when the two cars in front of him banged doors with three laps to go, Keselowski slid past their damaged cars into the lead. From there, he sprinted to the victory to win the Food City presents the Supermarket Heroes 500.

“We kind of got a Christmas present here in Bristol,” Keselowski, the 2012 series champion, said. “We’ll take it.”

The victory was the second of the season for Keselowski, who won last weekend’s 600-mile race at Charlotte Motor Speedway. It was his 32nd career victory in the NASCAR Cup Series and it was his third on the high-banks of the Bristol half-mile in Tennessee.

He started Sunday’s race from the pole — which was determined by a random draw. But he looked like a huge long shot during most of the final stage of the race.

Aiding his effort to get the win was a decision by his Team Penske team to pit for tires late in the race.

“We couldn’t get anything to go our way at the start of the race with cars staying out and I kept getting the bottom lane on restarts and nothing was working out and then right at the end we came in and put two tires on the left and drove up to, I guess fourth or sixth, I don’t know, something like that and put ourselves in position,” Keselowski said.

But it was a collision by front-runners Joey Logano, his Penske teammate, and Chase Elliott, the winner of the second race at Charlotte last week, that gave him the victory.

“I could see Joey and Chase were getting really racy there and I didn’t know what was gonna happen,” Keselowski said, “but I knew if I kept my eye open something good might happen and, sure enough, it did. An incredible day. I’m so happy for the team. This was a never-give-up effort. That’s what we’re becoming as a team.”

After the race, Logano and Elliott could be seen in the pits and they were not social distancing.

“He wrecked me,” Logano said. “He got loose underneath me. The part that’s frustrating is that afterwards a simple apology — like be a man and come up to someone and say, ‘Hey, my bad.’ But I had to force an apology, which, to me, is childish.

Said Elliott, who won the award as NASCAR’s most popular driver last year: “Just going for the win. Just trying to get a run underneath him. Got really loose. I don’t know if I had a tire go down or just got loose. I don’t know. I’ll certainly take the blame.”

The race, which was the fifth since NASCAR restarted its season after going on a pandemic-forced two-plus-month hiatus, featured 17 cautions and took almost four hours to complete.

Wrecks took out a number of contenders.

Ryan Blaney of Team Penske arrived in Bristol on a hot streak as he had finished third in the last two races — both at Charlotte Motor Speedway — and led a couple of times on Sunday. But on Lap 200 while running second, he spun and tagged the wall and was hit hard by Ty Dillon. The hit ended Blaney’s day.

“Got in the marbles,” Blaney said. “Probably shouldn’t have been pushing that hard but trying to get back to the lead.”