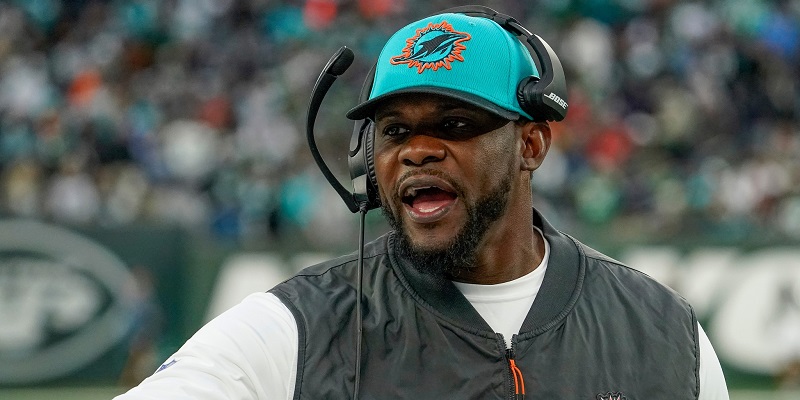 Former Miami Dolphins coach Brian Flores has filed a class action lawsuit against the NFL, the New York Giants and every other NFL franchise alleging racial discrimination in hiring practices.

The suit, filed on the first day of Black History Month, begins with an errant text message from New England coach Bill Belichick congratulating who he thought was Brian Daboll on getting the Giants job. However, it was Flores he was texting with, three days before Flores interviewed with the team.

In addition to the NFL and Giants, the Miami Dolphins and Denver Broncos are named as defendants along with John Doe Teams 1-29.

Flores also alleges he was fired by the Dolphins for not tanking in 2019, his first season, and for not violating the league’s tampering rules when owner Stephen Ross arranged a meeting between Flores and a “prominent quarterback.”

The suit was filed in United States District Court Southern District of New York. Flores is represented by Wigdor Law and the firm of Elefterakis, Elefterakis & Panek.

In the suit, the firms show screen grabs from Flores’ phone showing text messages between he and Belichick.

“I hear from Buffalo & NYG that you are their guy,” Belichick purportedly texted Flores, mistaking him for Daboll.

“Sorry — I f***** this up,” Belichick texts once Flores clarifies which Brian he’s texting with. “I double checked & I misread the text. I think they are naming Daboll. I’m sorry about that.”

“Mr. Flores was forced to sit through a dinner with Joe Schoen, the Giants’ new General Manager, knowing that the Giants had already selected Mr. Daboll,” the lawsuit says. “Much worse, on Thursday, January 27, 2022, Mr. Flores had to give an extensive interview for a job that he already knew he would not get — an interview that was held for no reason other than for the Giants to demonstrate falsely to the League Commissioner Roger Goodell and the public at large that it was in compliance with the Rooney Rule.”

Flores is considered a finalist for the Houston Texans opening and also reportedly interviewed with the New Orleans Saints.

“God has gifted me with a special talent to coach the game of football, but the need for change is bigger than my personal goals,” Flores said in a release put out by the law firm representing him in the case. “In making the decision to file the class action complaint today, I understand that I may be risking coaching the game that I love and that has done so much for my family and me. My sincere hope is that by standing up against systemic racism in the NFL, others will join me to ensure that positive change is made for generations to come.”

The Broncos are specifically named in the suit for their “sham interview” with Flores in 2019.

“It was clear from the substance of the interview that Mr. Flores was interviewed only because of the Rooney Rule, and that the Broncos never had any intention to consider him as a legitimate candidate for the job,” the suit reads.

Then there are the allegations lobbed against Ross and the Dolphins.

The suit alleges Ross offered to pay Flores $100,000 for every loss in the 2019 season. The team started 0-7 but finished 5-11, then being told by general manager Chris Grier that Ross was “mad” at Flores for “compromising (the team’s) draft position.”

“After the end of the 2019 season, Mr. Ross began to pressure Mr. Flores to recruit a prominent quarterback in violation of League tampering rules. Mr. Flores repeatedly refused to comply with these improper directives,” the suit reads.

Ross then set up a meeting on his yacht between Flores and the unnamed QB, but Flores left.

“After the incident, Mr. Flores was treated with disdain and held out as someone who was noncompliant and difficult to work with,” the suit reads. “From that point forward, Mr. Flores was ostracized and ultimately he was fired.

“He was subsequently defamed throughout the media and the League as he was labeled by the Dolphins brass as someone who was difficult to work with. This is reflective of an all too familiar ‘angry black man’ stigma that is often casted upon Black men who are strong in their morals and convictions while white men are coined as passionate for those very same attributes.”

The Giants released a response to Flores’ allegations Tuesday afternoon.

“We are pleased and confident with the process that resulted in the hiring of Brian Daboll,” the Giants said. “We interviewed an impressive and diverse group of candidates. The fact of the matter is, Brian Flores was in the conversation to be our head coach until the eleventh hour. Ultimately, we hired the individual we felt was most qualified to be our next head coach.”

The NFL also released a statement Tuesday afternoon that read: “The NFL and our clubs are deeply committed to ensuring equitable employment practices and continue to make progress in providing equitable opportunities throughout our organizations. Diversity is core to everything we do, and there are few issues on which our clubs and our internal leadership team spend more time. We will defend against these claims, which are without merit.”