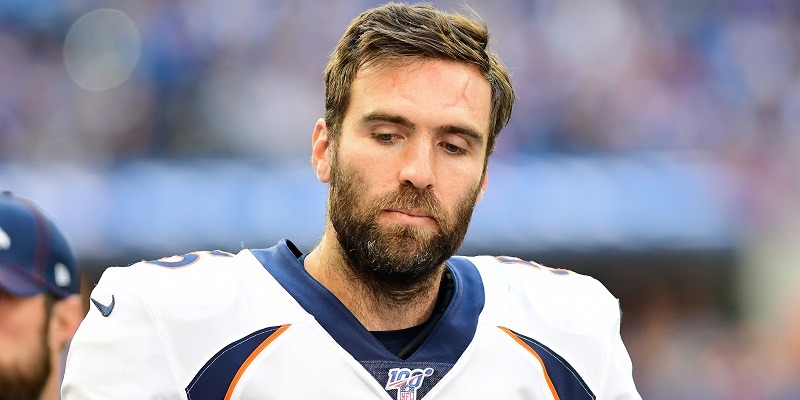 Denver Broncos quarterback Brandon Allen will make his NFL debut this weekend when he gets the start against the visiting Cleveland Browns, the team announced Monday.

Allen was selected by the Jacksonville Jaguars in the sixth round of the 2016 NFL Draft. The 27-year-old is getting the nod for Sunday’s game in place of Joe Flacco, who reportedly is nursing a neck injury.

Broncos coach Vic Fangio didn’t rule out the possibility of a stint on injured reserve for Flacco, who was critical of the team’s lack of aggressive play-calling in a 15-13 loss to the Indianapolis Colts on Sunday.

Flacco, who is not known for spicy soundbites, expressed disappointment with the Broncos’ lack of aggressiveness — particularly in the final minutes. Denver led 13-12 and had a third-and-5 at the Colts’ 43-yard line in the final two minutes. A running play was called, and the Colts stuffed Phillip Lindsay for no gain.

On the next play, Broncos punter Colby Wadman arched a 32-yard punt to the Indianapolis 11-yard line.
The Colts quickly marched down the field to set up a game-winning, 51-yard field goal from Adam Vinatieri.

“I mean, come on,” Flacco said to reporters. “I just look at it like, we’re now a 2-6 football team and we’re like afraid to go for it in a two-minute drill. You know? Like, who cares if you give the ball back to the guys with 1:40 left? They obviously got the field goal anyway. Once again, we’re a 2-6 football team and it just feels like we’re kind of afraid to lose the game.

“It’s third-and-5 at the end of the game, who cares if they have a timeout there at the end or not? Getting in field goal range isn’t that tough. You’re just putting your defense in these bad situations and I just felt like, ‘What do we have to lose? Why can’t we be aggressive in some of these situations?’ That’s kind of how I feel about a lot of the game today.”

Fangio said a decision on Sunday’s backup would be made later this week. The Broncos could activate rookie Drew Lock from injured reserve or promote Brett Rypien from the practice squad.

Broncos president John Elway said last week that Lock was not ready to take over the starting job from Flacco.

“And as you know dealing with quarterbacks, it’s a very tough thing because if you don’t put him in a situation where he has a chance to be successful and he’s not successful, the whole roof will cave in. So we have to make sure that Drew is ready when he does get in there, if he does get in there.”

Elway continued: “We’re still in the process of evaluating that. He is not ready to go right now, I will tell you that.”

Lock, who was the 42nd overall pick in the 2019 NFL Draft, has been sidelined with an ailing thumb on his throwing hand.

The 22-year-old Lock won a camp battle with Kevin Hogan to back up Flacco, but he was injured in the fourth preseason game against the San Francisco 49ers. The team released Hogan and signed Allen to back up Flacco.