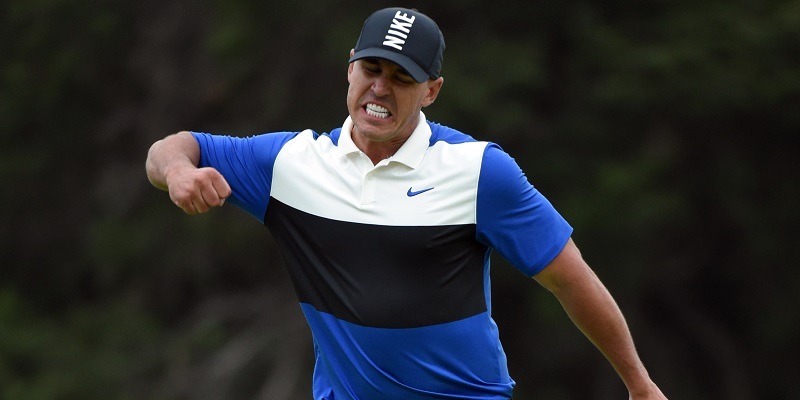 Brooks Koepka clutched the trophy and figured even the anxious moments were worth it Sunday.
Koepka withstood a shaky back-nine stretch and held on to win the PGA Championship for the second year in a row.
“That was a stressful round of golf,” Koepka said. “I’m glad to have this thing (Wanamaker Trophy) back in my hands.”

Koepka’s lead shrunk to one stroke on hard-charging Dustin Johnson before steadying himself for what became a 4-over-par 74 final round at Bethpage Black in Farmingdale, N.Y.
His 8-under 272 total was good enough for a two-shot edge on Johnson, who shot 69 on Sunday.
Koepka has won a major championship in three consecutive years and has four total major titles. With those four coming in an eight-tournament stretch of majors, it puts him in more elite company.
This took a different vibe than last year’s PGA Championship title for Koepka at Shinnecock, though he said the approach is the same.
“I’m trying to win a golf tournament,” he said. “I’m not focused on anything else other than hitting a good shot or a good putt.”
Koepka, 29, became the first golfer to successfully defend titles in the U.S. Open and PGA Championship. He’s the fifth wire-to-wire winner in the PGA Championship. He will try for his third consecutive U.S. Open title June 13-16 at Pebble Beach Golf Links in Monterey, Calif.
Johnson marveled at Koepka’s accomplishments.
“He’s one of the guys that I look for that I have to beat,” Johnson said. “He’s one of the best players out here, so he’s always somebody that I’ve got my eye on.”
After three days of Koepka appearing to be in an invincible position, there were signs of drama approaching when the gap on the field dipped to four shots.
“I’m just happy we didn’t have to play any more holes,” Koepka said after the round.
Johnson played the front nine in 32, cutting the margin to four strokes on Koepka. The advantage fluctuated until it was at one shot after Koepka’s consecutive bogeys on Nos. 11, 12, 13 and 14.
Amid that, Johnson posted a birdie at No. 15. Moments after Koepka’s bogey streak reached four holes, Johnson gave a stroke back with a bogey at No. 16 and then another on the next hole, when he missed the green on the par-3 17th. Johnson saved par on the final hole while playing out of a bunker.
Johnson said at key moments he encountered trouble contending with wind gusts, just like the other golfers.
“It was the most wind we’ve had all week,” Johnson said.
Koepka bogeyed the first hole Sunday, and then appeared to be in total control until the 11th.
“I knew if I could get off to a good start, which I did, that I could maybe put a little bit of pressure on him,” Johnson said. “… Obviously I knew starting seven back that it was going to be a big feat to catch Brooks. You know, I definitely gave him a run, though, so I was happy with that.”
Nobody has ever led by as many as seven shots entering the final round of a major and failed to win. Koepka was up by six strokes with eight holes to play.
Yet his final-round score was 11 shots off the 63 he posted in Thursday’s first round.
Jordan Spieth (71), Patrick Cantlay (71) and England’s Matt Wallace (72) all were at 2 under to tie for third place. Luke List (74) was alone in sixth place at 1 under.
Spieth said he made good headway during the tournament on a course that’s not suited for his game. It marked his first top-10 finish on the PGA Tour this year.
“Bethpage, just when the rough is up this high, obviously I can’t pick a course that’s probably further away from it being for me,” he said.
It wasn’t an easy round for any of the golfers on the course.
“I played really well. I hit a lot of good shots,” Cantlay said. “I actually hit some good shots that didn’t end up in good spots. Caught gusts. I’m sure everyone was catching gusts out there.”
Harold Varner III, who was Koepka’s playing partner in the final pairing, birdied the first hole in pursuit of his first PGA Tour victory. He soon tumbled out of contention, shooting an 11-over 81 on the final day.
Denmark’s Lucas Bjerregaard had a hole-in-one at No. 17. His shot bounced once and then into the cup for the only ace of the tournament.
–Field Level Media (@FieldLevelMedia)